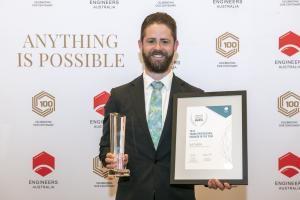 Snedden is a Chartered civil and structural engineer for Jacobs, one of the state’s largest employers of engineers. Starting as an Undergraduate with Jacobs (then SKM) in 2006 at the height of the mining boom, Snedden has since occupied various roles in five offices across three countries.

Roles and projects have included irrigation renewal in the Goulburn Murray Irrigation area, earthquake recovery in Christchurch, capacity development and aid work in Timor Leste, and leading teams and projects in Darwin and Adelaide. Recently, Snedden’s focus has been on bridges and design management within the transport infrastructure sector, particularly roads, rail and maritime projects.

For Snedden, the National Awards Dinner highlighted the engineering talent in Australia.

“I managed to get out of my chair without tripping on my napkin – so better than my reaction to the Division Award”, Snedden joked when asked about his reaction to the award.

“I was honoured to be named; the strength and diversity of experience of the other Division winners was very impressive and bodes well for the future of our industry.”

When asked about the projects that had shaped his engineering career, it is clear Snedden’s experience has allowed him to gain insight into both the technical and personal skills required of engineers.

“The Northern Victoria Irrigation Renewal Project and FutureFlow Alliance saw me thrown in the deep end very early in my career and given a lot of autonomy.

“I had some great mentors on that project and the alliance model allowed me great insights into the whole of the project cycle.

“Working in Christchurch following the 2011 earthquake was another career defining project, and the scale of the human and economic loss really brought home the importance of what we do.

“The lessons learnt from seeing first-hand literally thousands of examples of engineering failure are unforgettable.

“My role in Timor Leste saw me embedded in the Ministry of Infrastructure developing capacity in their engineering teams, and gave me exposure to a broad range of international engineers and codes.

“It was challenging and sometimes frustrating work and I learnt volumes on resilience and perseverance.

“The role culminated with me co-authoring the Timor Leste Bridge Design Manual as part of the International Technical Assistance Project.”

In 2016, Snedden returned to Adelaide from Darwin, and has continued to hold a diverse range of roles.

“I was the Section Leader for the Built Environment group in Adelaide, managing the day to day of our Architecture, Building Services and Structural Engineering teams, and this year I moved to a more client and delivery focused role as Transport Sector Leader for South Australia.

“We undertook a pavement assessment and survey for Flinders Adelaide Container Terminal using 3D laser scanning, drones and a web-based GIS interface that I am pretty proud of.

“I’ve also been heavily involved in a proposal to develop a private grain export facility on the Eyre Peninsula called Port Spencer; we’ve been with the client since the beginning and recently submitted the amendment to the Public Environmental Report for development approval.

“I’m excited to see that go ahead.”

Snedden also looks forward to seeing where digital engineering will lead the profession.

“The technology across a range of fronts is coming on so fast, and the capital and processing power barriers are really coming down.

“The challenge is how to stitch all of these (currently) disparate technologies and data sources into something that planners, architects, engineers, builders, owners and users/operators can understand, engage with and ultimately benefit from.

“I think that genuinely integrated digital engineering workflows and using the resultant digital twins throughout asset lifecycles will provide some really great opportunities for engineering and society more broadly.”

Both on a personal and work level, Snedden has a busy 12 months in the pipeline.

“My son is eight weeks old and I’m taking some paternity leave in the new year; I’m planning to teach him how to drive an excavator but finding PPE to fit a three month old a bit hard to source!

“Work wise, I’m looking forward to Port Spencer going ahead and targeting a number of transport opportunities in South Australia, including grade separations and the South Road duplication project.

“Jacobs has big plans for the coming year – our new brand and significant pivots in our market focus and presence will see us really focussed on technology and innovation.”

The Engineer of the Year Awards confer recognition for outstanding individual engineering achievements and promote those engineering professionals who show innovation and resourcefulness in their work.

NOMINATE NOW FOR 2020 ENGINEER OF THE YEAR AWARDS