As crocodiles move by stealth, coming across one in northern Australia can literally mean a matter of life or death, but an AI algorithm is keeping an eye on these magnificent creatures to protect unsuspecting humans.
News Image 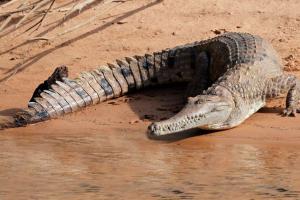 As crocodiles move by stealth, coming across one in northern Australia can literally mean a matter of life or death, but an AI algorithm is keeping an eye on these magnificent creatures to protect unsuspecting humans.

In a world-first, drones have been fitted with an early warning system – the CrocSpotter - that seeks out and identifies crocodiles with an accuracy of 93% in less than a second. There are about 100,000 freshwater crocodiles and a further 150,000 saltwater crocodiles across northern Australia, according the Northern Territory Government. Despite numbers, Australia has only recorded about 100 attacks in almost 50 years, around 27% of which were fatal, according to researchers at Charles Darwin University.

Developed by the UTS Centre for Artificial Intelligence and industry partner Westpac Little Ripper, the CrocSpotter warning system's ultra-low latency streaming is achieved via the AWS cloud. The UTS drone carries the AI as part of its payload along with a smart camera. Video streams in real-time from the drone to its pilot on the ground and the algorithm operates by 'washing' the video and alerting the pilot to a possible threat. The threat is highlighted by a flashing red box on-screen around the detected animal.

The AI technique being used is that of Deep Neural Networks which detects the reptiles. The technology, UTS' Dr Nabin Sharma says, enables detection of the animals in complex environments, including murky and muddy waters in wetlands and in the open ocean. The warning system is the second for Professor Michael Blumenstein and Dr Sharma who worked on the SharkSpotter, an AI-powered drone-based technology for protecting swimmers on Australian beaches.

UTS says the Queensland Government is keen to see the CrocSpotter technology rolled out to prevent crocodile attacks. The technology is also expected to contribute to a better understanding of the 100 million year-old predators for conservation purposes.