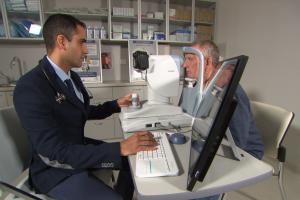 CSIRO has developed an eye-screening test that utilises artificial intelligence, which could help detect diabetic retinopathy earlier than through traditional methods.

Around 1.3 million Australians have been diagnosed with diabetes in Australia, and diabetic retinopathy affects one in three people who have diabetes. If the condition is not treated, it can lead to blindness.

While only optometrists and ophthalmologists can currently screen for the condition, the new world-first technology could help patients receive treatment faster at their GP clinic.

CSIRO's Yogi Kanagasingam said patients at risk of the condition are typically referred to a specialist to be screened, which can mean a six-week or longer wait.

But screenings using the new technology, which has been dubbed Dr Grader, can be done in as quick as 10 minutes, and means the condition can be conducted by a local GP and patients can be referred to an ophthalmologist based on the severity of their condition.

This could not only reduce wait times for the test, but also lessen the need for referrals to public hospitals.

Kanagasingam said the technology may even prompt some patients to get their eyes checked when they might not have gone for a screening in the first place. He said one patient was referred to see an ophthalmologist, but they put off going because of the cost (eye screening for diabetics at GP clinics is covered under Medicare) and an about six- to eight-week wait.

The screening is done after a photo of a patient’s retina is taken at a GP clinic. AI technology then analyses the image and within 30 seconds it can determine whether a person has mild, moderate or severe symptoms.

The technology has been developed to detect particular features of diabetic retinopathy using around 30,000 images.

This included eyes from multiple ethnicities – Caucasian, Asian and African – because each group has different eye pigmentation and structures, so the system had to be trained to be able to read different kinds of retinas.

This meant a massive dataset was required for each category, with images also needing to be ranked by an ophthalmologist according to severity.

“Then we had to train the computer to look for certain kind of pathology that the ophthalmologist had graded,” Kanagasingam said.

Trials of the technology have been carried out at GP Superclinic at Midland Railway Workshops in Perth, with funding from a National Health and Medical Research Council (NHMRC) grant and base funding from WA Health and CSIRO through the Australian Tele-health Research and Development Group.

A total of 187 diabetic patients were screened by GPs during the trial, which involved taking high resolution images of their eyes. These images were then analysed by the AI technology for signs of diabetic retinopathy.

The images were also analysed by an ophthalmologist as a basis of comparison.

The outcomes of the trial were much better than expected – Kanagasingam said the technology achieved 100 per cent accuracy.

Nurses who conduct the retinal imaging go through a one- or two-day training program on how to use it to learn, for example, how to take photos of eyes that are high quality enough for the software to analyse.

They also need about one week of training to get used to using – the software has in-built quality control that tells the user if their photo needs to be taken again.

The technology has been licensed by TeleMedC, with plans to install it at 20 GP clinics in Western Australia over the next few months, before rolling it out across the rest of Australia.

There are also plans for Dr Grader to be expanded to other countries, such as Singapore and Korea.

“Also, the number of diabetics in China and India are massive. In India, there are about 80 million people with diabetes, and in China it’s even more, so those are the two other countries we are targeting,” Kanagasingam said.

This means further trials to test for different ethnicities, as the GP Superclinic trial primarily involved people who were Caucasian.

“There’s just a large population difference, so we are working with one of the universities [in Singapore],” Kanagasingam said.

“We have tested so far quite a lot of images from Singapore, and we haven’t had any problems with pigmentation.”