An app that allows Aboriginal rangers to gather environmental and animal data in their own languages has won the Medal for Aboriginal and Torres Strait Islander Engagement at the CSIRO Awards.
News Image 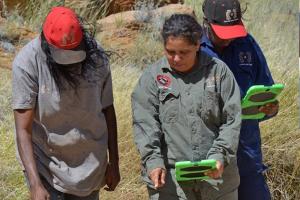 An app that allows Aboriginal rangers to gather environmental and animal data in their own languages has won the Medal for Aboriginal and Torres Strait Islander Engagement at the CSIRO Awards.

Developed by Atlas of Living Australia (ALA), the Tracks App received significant input from Indigenous rangers in the design process, language translations and testing in the field. It was launched in Alice Spring 18 months ago and is now used by 19 ranger groups that have tracked more than 40 animal species in English and the languages of Warlpiri and Warramungu.

Given the recent devastating fires and loss of animal lives and habitat across Australia, the app's success is welcome news. The CSIRO explained that the software simplifies the collecting and sharing of standardised field data, has smart features and multi-lingual functionality. It allows rangers to input data about animal tracks, scats (droppings), digging and burrows in the field while the results can be analysed across time and sites and compared in the future with other surveys.

This information will allow conservationists and land managers to determine changes in local biodiversity and monitor the broader impacts of feral species. They will also be able to check on changes in animal populations associated with climate change across Australia's desert regions.

Hamish Holewa, Deputy Director of the ALA, said the app has helped Indigenous people share their wealth of knowledge about the environment and animal movements.

"The Tracks App reduces technical barriers to Indigenous communities participating in valuable scientific work using their first language and traditional tracking practices and to pass on these skills and knowledge to future generations," he said.

Peter Donohoe, Manager of Land Management at the Central Land Council (CLD), which commissioned the app, said there was a lot of interest in adding more Indigenous languages.

"The CLC has 12 ranger groups who speak 16 languages, and there are 46 ranger groups in the broader Indigenous Desert Alliance, so there are many more languages we're keen to expand the app to include," he said.

According to Mr Donohoe, the Tracks app allows rangers' tracking skills to be used to develop a more timely and comprehensive understanding of threatened and pest species across a region of Australia that is generally data-poor. He added that it would also help to inform management strategies for sensitive desert eco-systems for traditional owners of the land.