Engineers in Australia have developed a solar cell that can be incorporated into window glass, representing a game-changer for multi-storey building design and electricity generation.
News Image 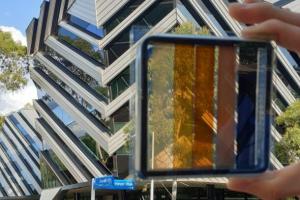 Engineers in Australia have developed a solar cell that can be incorporated into window glass, representing a game-changer for multi-storey building design and electricity generation.

The researchers from the ARC Centre of Excellence in Exciton Science and Monash University have produced 'next generation perovskite solar cells' that are semi-transparent. Two square metres of these solar cells generate about as much electricity as a standard rooftop solar panel and allow light to pass through at the same time.

The project, led by Professor Jacek Jasieniak and his colleagues from Monash's Materials Science and Engineering Department and CSIRO, used an organic semi-conductor that can be made into a polymer. They replaced a commonly used solar cell component (Spiro-OMeTAD) that is known to have poor stability, with this polymer and were met with "astonishing results".

However, there is a small trade-off Professor Jasieniak revealed: "The solar cells can be made more, or less, transparent. The more transparent they are, the less electricity they generate, so that becomes something for architects to consider."

But, he also said that solar windows tinted to the same degree as currently glazed commercial windows would still generate about 140 watts of electricity per square metre. While large windows in high-rise buildings are expensive to make, the additional cost of incorporating the solar cells will be marginal.

"Even with the extra spend the building then gets its electricity free," Prof Jasieniak said.

The new technology will influence a change in thinking for designers and engineers alike. Until now, windows have been thought of as passive, but when they actively produce electricity (and reduce running costs) there will be the position of the structure on the site to be considered in how to optimise the solar windows catching the sun.

The new technology is already being investigated for use in commercial products with Viridian Glass, Australia's largest glass manufacturer, and the hope is to bring it to market within the next decade.

The development of this technology is outlined in the May issue of Nano Energy, however, the paper is available now on early release.