The compact gait monitoring device can be embedded in the heel of a shoe or attached near the laces, which can then be linked to a wireless attachment on the person’s wrist.
News Image 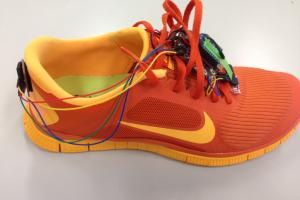 Gita Pendharkar has designed and developed a number of innovative prototypes for monitoring and assessing the gait in stroke, Parkinson’s and diabetic patients.

The compact gait monitoring device can be embedded in the heel of a shoe or attached near the laces, which can then be linked to a wireless attachment on the person’s wrist.

The system can track a person’s gait in real time and give out auditory or vibratory feedback if an abnormal gait is detected so patients can correct it accordingly.

The idea came from children she met at Monash Medical Centre who walked on their toes. The problem was that while there was nothing neurological that caused the children to walk in this manner, it was either genetic or had become habitual.

“The problem with these children was that when they would come into the clinic with their parents, they would deliberately start walking normally, because they could, and tried to show the clinician that they had a normal gait,” Pendharkar said.

“When they got back home and were in their comfort zone, they went back to walking on their toes.”

This meant assessing the gait of these children was problematic.

In a project in conjunction with Monash Medical Centre, Pendharkar did some initial experiments in 2003 and 2004 and then developed a compact system that could assess their gait in real time.

While the clinic for the children at Monash Medical Centre eventually closed down, there was lot of interest from other clinics in using the system.

The first prototype designed and developed for gait monitoring was not wireless, as the technology was not quite established in 2003. But after about 2008, wireless technology had been established and Pendharkar was able to develop a wireless device.

“Since then, the sensors and micro-controllers have become really compact, so the system we are developing is also becoming compact and easy to use,” she said.

The inertial sensors consisting of accelerometers, gyroscopes, magnetometers were initially used in the device. All of the sensors form an integrated circuit, which is interfaced to a micro-controller.

When a person walks there’s an acceleration and deceleration, with all of this data captured by the accelerometers. Meanwhile, the magnetometers give a sense of direction and the gyroscopes give angular velocity.

Having all three sets of data allows users to develop a spatio-temporal model of a full gait cycle, whether it’s a normal heel-to-toe gait or an abnormal gait where the users drag their feet, which can be seen in stroke subjects.

All of this information can be wirelessly transmitted to a computer.

The device can be used in several different types of applications, with Pendharkar and her student’s working on several projects, including a system that uses temperature and pressure sensors, accelerometers and gyroscopes that are embedded in the sole of a shoe to help monitor the gait in diabetic people.

“In diabetic people, they lose sensation in their foot and are prone to developing sores because their foot is not very sensitive in detecting the changes in temperature, especially when exposed to high temperature,” she said.

Another recent project involved distinguishing the gait of someone with Parkinson’s and differentiating it from someone with drug-induced Parkinson’s, which can occur in patients with Multiple Sclerosis or Schizophrenia, where a particular drug can cause the disease.

The system is ready to be used in boots, with the team about to carry out trials with the Monash Alfred Psychiatry Research Centre on three groups – standard subjects first, patients with drug-induced Parkinson’s and Parkinson’s subjects.

One of the main challenges in designing and developing the device was making the system as compact as possible, possibly to the size of a wristwatch.

Battery size and life has also been a challenge as they need to be charged depending on the usage.

“Implementing complex algorithms in the micro-controller will also always be challenging as it is the algorithms that gives the intelligence to the device. As new micro-controllers come up, there are a lot of things that we can program, so we are addressing some of those challenges as it is,” Pendharkar said.

The team also needs to ensure accuracy, which means working out what parameters they are trying to capture – accuracy can change depending on how the device is used, with the team aiming for a very high accuracy.

Pendharkar said getting this high accuracy will take time, and that commercialisation could be another five or six years away.

“There are already devices on the market like this, but to get something as an established device with high accuracy that can be readily used by clinicians – we are close,” she said.