Few men impacted society and generations more so than military and engineering legend Sir John Monash. Read more about his story in this exclusive excerpt from ‘Anything is possible’ – Engineers Australia’s celebration of 100 Australian engineering leaders, now available to purchase.
News Image 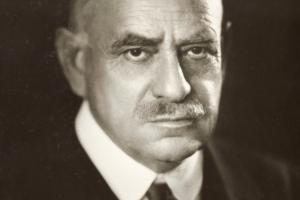 It is difficult to encapsulate the achievements of many engineers in this book, noting the fullest of lives in service, community and of engineering itself. Yet special reverence is held for the accomplishments of General Sir John Monash: authoritative engineer, war hero, captain of industry, and a genuine shaper of a community.

From the precocious, 16-year-old dux of mathematics and modern languages at Scotch College, Monash was clearly an intuitive, gifted talent. His engineering experience at the University of Melbourne was short-lived due to financial hardship – he would later complete numerous qualifications while working at the Melbourne Harbour Trust early in the 1890s, before striking out on his own as a consulting engineer and contractor.

Monash soon became one of Australia’s foremost experts in reinforced concrete for bridges, railways and other large construction projects, yet it was a precursor to his most influential role, that of military commander. Having joined the newly formed University Company, D Company, 4th Battalion, Victorian Rifles as a 19-year-old, by 1913 he was a soldier with a deep knowledge of military matters. When World War One broke out, Monash was primed to contribute, and contribute he did: he was among the first under fire at Gallipoli.

In June of 1916, Monash and his command were transferred to the Western Front. Despite his high community status and obvious abilities, Monash suffered prejudice regarding his German Jewish heritage, being a colonial commander among British gentlemen officers and being from the ‘militia’ rather than a professional soldier. Nevertheless, the British High Command was impressed by Monash’s planning and management abilities and enthusiasm. In May 1918, he was promoted to Lieutenant General and made commander of the Australian Corps, at the time the largest individual corps on the Western Front.

In 1918 King George V knighted him on the battlefield for his role in the Battle of Hamel Hill. Many historians consider him to be the foremost Allied military commander of the First World War.

His legacy was arguably secure, but after the war he returned to engineering and became the first Chairman of Victoria’s new State Electricity Commission. During his time as Chairman the SECV he undertook the technically difficult development of the brown coal resources of the Latrobe Valley, including the building of Yallourn Power Station.

In his last years, within his community and service activity he supervised construction of Melbourne’s Shrine of Remembrance, oversaw the public appeal for funds, and rewrote the inscription planned for the west wall.

In 1929, the Institution of Engineers, Australia awarded Monash its highest honour, the Peter Nicol Russell Memorial Medal, and two years later the University of Melbourne gave him the Kernot Memorial Medal for distinguished achievement in Australian engineering.