Dr Shane Geha, Entrepreneur of the Year winner at Engineering Excellence Awards Sydney 2016 and Managing Director of EG Urban Planning, writes on the structure that has inspired generations of engineers.
News Image 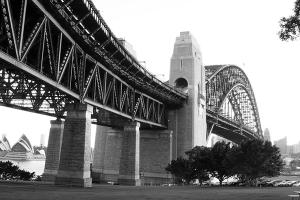 Article by Dr Shane Geha FIEAust, winner of the Entrepreneur of the Year at Australian Engineering Excellence Awards Sydney 2016. Mr Geha is the Managing Director of EG Urban Planning with experience of managing over AU$200 million property development in NSW and the ACT. He graduated from the University of Sydney as a Civil Engineer and holds a PhD in Planning from the University of NSW.

From the large window that besets a typical Sydney city office, is the most spectacular view of J.J. Bradfield’s 1932 masterpiece. Beneath this spectacular steel structure is arguably the world’s most beautiful harbour, upon which a variety of water vessels drift white frothy trails across the calm and comforting waters of the Pacific Ocean. Yet, one may become so preoccupied with the rigours of resolving the rezoning and engineering complexities entailed in the piles of folders upon one’s desk, that the view may go unnoticed. Instead, one can become inevitably buried in mountains of paperwork, and electronic devices with interminable demands whilst fixated upon large screens that further obscure that marvellous view from the window.

In the distance, with its well-engineered truss and sandstone pylons, rests one of the world’s greatest engineering masterpieces. Millions travel the world for more than 20 hours in an aeroplane, spending thousands of dollars just to take a glimpse at this view, yet for many others, the unique has become commonplace, the extraordinary has turned into the prosaic, and the spectacular has become the invisible. It has its own understated but strong voice, it captures not only sight, but also the imagination. It is almost visceral, subliminal, soulful in the way it touches the psyche of all who see it.

When Bradfield completed the Sydney Harbour Bridge, he could not have known the profundity of its impact – not because he would have underestimated its enormous utility, functionality or contribution to daily life, but rather because its impact has been even greater than anyone could have imagined. It is perhaps the most important structure Australia has ever witnessed and to the engineering genius that presided over its construction, we feel a great debt. More than the 53,000 tonnes of steel was used to build it, with 1,400 men contributing their labour in the construction of the highly-complex eight-year project. The genius of Bradfield was to give our city its first sense of identity…the feeling that every denizen was special, and that every room came with a view.

So, as one recasts one's eyes once again over its spectacular structures, it is most certainly more than “water under the bridge” … it is the timeless gift that Bradfield gave to our city. It is, therefore, fitting that the most prestigious award given to the engineers of the Overall Winning Project by Engineers Australia Sydney, is named the Bradfield Award and is presented at the wonderful Australian Engineering Excellence Awards Sydney. In its own understated way, while we gaze out of our office windows, travel across its span to return home, or enjoy its splendour in a tourist photo to Tweet back to friends, it is still giving all of Sydney and the world, something very special to savour.