WA Engineer Jordan Butler has come away with the WA Young Professional of the Year at the WA Engineering Excellence Awards in Perth.
News Image 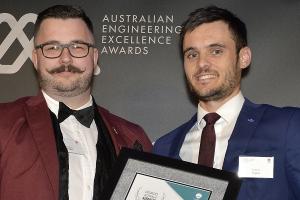 Jordan Butler was announced as the winner of the WA Young Professional Engineer of the Year 2018 at the Engineers Australia WA Engineering Excellence Awards hosted at the Westin Perth on 25 July.

While at Edith Cowan University, Jordan was engaged for a year as Engineers Australia student representative. The role as an ambassador for Engineers Australia (EA) involves being a representative of EA at the campus and actively helping engineering students to understand and benefit from the resources offered by EA. He was involved in this and was an essential part of the EA team running events at ECU to help student engineers to establish their careers.

During his time at ECU, Butler realised a significant issue and became engaged in research entitled “Student Practicum: A Minimum Standard for Australian Engineers”. The research looked at addressing the problem of student engagement in engineering practicum and proposed methods to improve the relationship between industry, academia, and Engineers Australia to improve practicum outcomes.

Butler was a founding member of the Student Practicum Working Group (SPWG) and was key to its establishment. Through anecdotal and statistical evidence collected in Butler’s research, the group was able to identify key issues that needed to be addressed, particularly in the professional experience placement component of engineering degrees.

The SPWG was established by the Engineers Australia WA Division Committee to target the issues associated with student practicum engagement. Butler was integrally involved in organising and running the first industry engagement night (an open discussion with industry on the problems they identified with practicum). He was also involved in the development of the documentation distributed to industry, universities and students and in determining priorities for the group.

Butler believes the work of the SPWG will lead to better opportunities for students and grads in Western Australia.

“It is my hope that the ongoing work of the SPWG will influence a series of best practices that will future proof student engagement in industry for the next economic downturn, as well as guaranteeing a higher standard of graduate who has a good well-rounded understanding of the industries they are entering,” Butler said.

“Without a strong engineering pipeline our industry does not exist; it is imperative that we do what we can to guarantee the best for the next generation of engineers to come through.”

With plenty of engineering ahead of him, Butler hopes he can leave his field in a better place than when he started.

“I want to be technically excellent and advance my field,” Butler said.

“I want to help create structures that have meaning and purpose and enable humanity to be better and to do better.

“My goal is to be able to look back 40 years from now and know that I helped build the world around me.”