Can you make a transistor from a single molecule?

If Moore's Law is to hold true for some time yet, component sizes will ultimately approach the atomic level. A group of American researchers are claiming single molecules can work as reproducible transistors at room temperature.
News Image 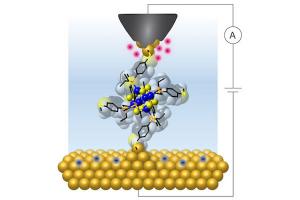 If Moore's Law is to hold true for some time yet, component sizes will ultimately approach the atomic level. A group of American researchers are claiming single molecules can work as reproducible transistors at room temperature.

The team from Columbia University in New York has achieved the current blockade effect — the ability to switch a device from the insulating to the conducting state where charge is added and removed one electron at a time — using atomically precise molecules at room temperature in a reproducible way. They believe this could lead to shrinking electrical components and boosting data storage and computing power

They first created a single cluster of geometrically ordered atoms with an inorganic core made of just 14 atoms — resulting in a diameter of about 0.5 nanometers — and positioned linkers that wired the core to two gold electrodes, much as a resistor is soldered to two metal electrodes to form a macroscopic electrical circuit.

The researchers used a scanning tunneling microscope technique to make junctions comprising a single cluster connected to the two gold electrodes, which enabled them to characterise its electrical response as they varied the applied bias voltage. The technique allows them to fabricate and measure thousands of junctions with reproducible transport characteristics.

“We found that these clusters can perform very well as room-temperature nanoscale diodes whose electrical response we can tailor by changing their chemical composition,” says Professor Latha Venkataraman.

“Theoretically, a single atom is the smallest limit, but single-atom devices cannot be fabricated and stabilised at room temperature. With these molecular clusters, we have complete control over their structure with atomic precision and can change the elemental composition and structure in a controllable manner to elicit certain electrical response.”

Other studies have used quantum dots to produce similar effects but because the dots are much larger and not uniform in size, due to the nature of their synthesis, the results have not been reproducible. The Columbia team worked with smaller inorganic molecular clusters that were identical in shape and size, so they knew exactly — down to the atomic scale — what they were measuring.

[Columbia researchers wired a single molecular cluster to gold electrodes to show that it exhibits a quantised and controllable flow of charge at room temperature. Photo: Bonnie Choi/Columbia University]