CSIRO has come up with Australia’s own top secret recipe which will allow local industry to manufacture the lightweight but strong material from scratch for the first time ever.
News Image 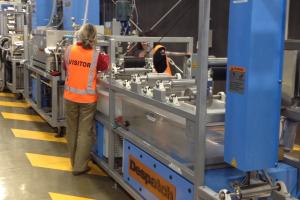 A team at CSIRO has produced Australia’s first entirely home grown carbon fibre, allowing Australian industry to mass-produce the next-generation materials that can be used in a range of products, from bicycles to sporting equipment to satellites and fighter planes.

Carbon fibre is made by a small number of manufacturers around the world, using their own secret, patented recipes. Combining high rigidity, tensile strength and chemical resistance with low weight, it has a wide range of applications.

According to CSIRO’s Chief Executive Dr Larry Marshall, the CSIRO has come up with Australia’s own top secret recipe, which will allow Australia’s industry to manufacture the lightweight but strong material from scratch for the first time ever.

It is hoped that this work will allow for further growth for the advanced manufacturing industry in Australia.

“From wind turbines to aerospace, even the latest Mustang wheels, a carbon fibre industry signals the kind of reinvention needed across Australian industry, shifting our focus from raw exports to high value products to retain our global competitive advantage,” Dr Marshall said.

The work, which is a collaboration between CSIRO and Deakin University, centres around Geelong, where Australia’s first carbon fibre was created from scratch using CSIRO produced white fibre. The aim is to turn the region in to an international carbon fibre and innovation hub.

The CSIRO team claims the patented technology is the first step in creating a generation of carbon fibre that is stronger and of a higher quality.