Held on Friday 20 September, the gala dinner held in the esteem of the Honourable Sir Eric Neal, past Governor of South Australia and Chancellor of Flinders University, was an opportunity to celebrate both Engineers Australia’s centenary and engineering leadership.
News Image 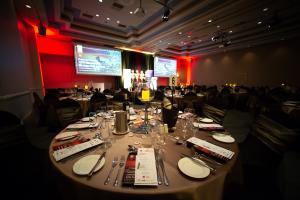 Held on Friday 20 September, the gala dinner held in the esteem of the Honourable Sir Eric Neal, past Governor of South Australia and Chancellor of Flinders University, was also an opportunity to celebrate Engineers Australia’s centenary.

The event was also an opportunity for reflection, and keynote speaker Gerry Doyle, Chief Executive Officer, Tonkin presented guests with a movingly open and honest discussion on his own battles with mental health. His address included how he manages his mental health and the importance of creating supportive workplaces and communities, and left guests with a lot to think about.

Guests also heard from National President Trish White, who spoke about the significance of Engineers Australia’s centenary, and South Australian President Lachlan Kinnear, who welcomed guests at the start of the proceedings.

The Craig Gilbert Leadership Award, sponsored by Tonkin, was awarded to An Lam, final year mechanical and biomedical engineering student at Flinders University.

Engineer of the Year – South Australia went to Dr Anthony Kwong from Frazer-Nash Consultancy, who specialises in noise and vibration, thermodynamics and fluid dynamics, and has worked across defence, nuclear, renewables and healthcare projects. He is an Engineers Australia Fellow and holds a MA and a Ph. D from Cambridge University.

For Dr Kwong, being awarded Professional Engineer of the Year was symbolic of an increasingly diverse profession.

“Every engineering project is a team effort, so I'm really humbled to be singled out for the award”, said Kwong.

“I cannot stress enough how much this means to me as a gay Chinese-Australian engineer, in the 100th anniversary of Engineers Australia, and a year that we embrace diversity and inclusion.”

Two national awards were also presented on the night. Michael Jones received the David Robinson Award from the Institution of Radio and Electronics Engineers (IREE) for achievements in information, telecommunications and electronics engineering.

The Sir John Madsen medal – for the paper selected by the Board of The College of Electrical Engineers as the best in the discipline of electrical engineering – went to Germane Athanasius, Mark Davies and Angus Ketley for “Experimental validation of transmission line dynamic thermal simulation model”.

The evening also included a welcome to country ceremony by Jack Bucksin, a live band to welcome guests, and plenty of networking opportunities.