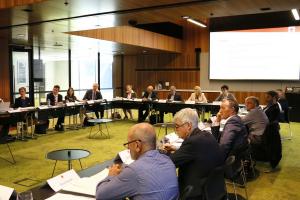 Leaders from industry, the scientific community, governance and academia came together with Engineers Australia to discuss how the engineering community can help limit the effects of climate change at the Engineering Responses to Climate Change Roundtable in February.

Chaired by CEO Dr Bronwyn Evans, Engineers Australia was also represented by National President and Chair Chris Champion, members of the board and chairs of EA’s Environmental College, College of Leadership and Management and Sustainable Engineering Society.

Roundtable participants agreed that in the face of new environmental threats from climate change, Australia needs to raise levels of resilience for all levels of society, from government to industry to organisations and infrastructure.

“We need to work out how we progress that because we will need it. Australia has been a resilient country in the past, but we're going to have to double down on how resilient we are, going forward. We will have to deal with a range of things that we probably haven't anticipated,” he said.

“They will each go on to influence countless others. That’s the way real change is created,” he said.

“We have a responsibility to take the lead and engage more closely with the profession. Engineers have an important role to play … we want to move beyond the words and the language to solutions,” he said.

A major theme across the day was the need for collaboration, with Engineers Australia pivotal in helping governments, industry groups, academia and communities work together to find solutions.

Engineers Australia leaders said they will actively seek to work with organisations, such as the Australian Procurement and Construction Council, to deliver low-carbon projects and considerations.

Regarding the economic impact of climate change disasters, delegates cited the recent bushfires as an example of why building resilience is important. Planners and designers need to involve engineers early in the planning stages.

“The changing role of engineers must involve being a part of that conversation where investment happens,” Engineers Australia Board Director Lucia Cade said.

“People who make investment decisions must understand that the bare minimum will get them so far, but as climate changes, they’ll be held to a different standard.”

While there remains much to be discussed on this complex issue, there was a consensus on the need for immediate action.

Chief Executive AECOM – Australia and New Zealand, Todd Battley added that organisations need to start working on solutions now to support young engineers who have the task of taking those solutions further.

“Climate change is this generation’s greatest challenge,” Mr Battley said. “When I speak with students at universities in an attempt to attract them into the profession, or into our firm, they’re looking for a cause. I can think of no greater purpose than this.”

Engineers Australia National Manager for Public Affairs and Policy Advocacy, Jonathan Russell, said roundtables like these go towards building stronger advocacy with both government and industry.

“These types of discussions – along with expertise and input from members – all feed into our ability to have an influence on climate-related decision-making,” he said.

To discuss solutions, challenges and how engineers play a role in the climate crisis, visit EA Xchange to join the forum.