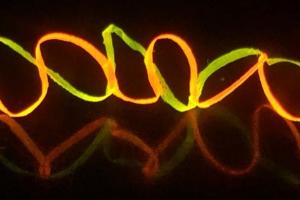 Natural silk fibres are made up of a complex mix of molecules, and the natural fibre still beats most human-engineered variants in strength. Engineers at MIT have found that by breaking down natural silk and then re-assembling it, they can make a material that is twice as stiff as the natural silk, and can be shaped into complex structures.

While spider silk is known to be one of the strongest materials known, spiders are not able to produce fibres in useful amounts. Professor Buehler’s team attempted to make purely synthetic silk, but found that their fibres were not able to match the strength of the natural versions.

Instead, they found that they could harness the best qualities of natural silk produced by silkworms, but introduce processing that would make it stronger, and thus allow it to form shapes and structures that could never be formed from natural silk.

The key to their process is to break down the natural silk, but not too much. The team dissolve the silkworm cocoons to an intermediate form composed of microfibrils, but before the material’s molecular structure breaks down. The microfibrils preserve some of the important hierarchical structures that give the silk its strength.

They then extrude the silk through a tiny opening to produce the tough regenerated silk fibre.

According to Dr Buehler, this process takes advantage of the fact that nature is still better at making the microstructures, which provides silk’s unique stiff, stretchy properties.

By retaining those naturally-bestowed aspects, engineers are able to take advantage of what nature provides. For example, silk is a naturally biocompatible substance that does not producer any adverse reactions in the body. The new regenerated silk fibre could be used for medical sutures, or scaffolding to grow new skin or other biomaterials.

The technique has another advantage: it is cost-effective. Silk thread and fabric are expensive, but the cost comes mostly from the labour-intensive process of unravelling the thread from the cocoon and weaving it. The actual production of silkworms and their cocoons are actually quite inexpensive. When bought in bulk, unprocessed silkworm cocoons cost only about US$5 per kilogram.

The method allows the researchers to shape the material in ways that could never be duplicated by natural silk. It could be formed, for example, into meshes, tubes, fibres much thicker than natural silk, coils, sheets and other forms.

Interestingly, the research opens the way for 3D printing customised for silk solution. The specific properties of the fibre, such as its stiffness and toughness, can be controlled by varying the speed of the extrusion process.

These reconstituted fibres are also very sensitive to different levels of humidity, and they can be made electrically conductive by adding a thin coating of another material such as a layer of carbon nanotubes. This could enable their use in a variety of sensing devices, where a surface covered with a layer or mesh of such fibres could respond to the press of a fingertip, or to changes in the ambient conditions.