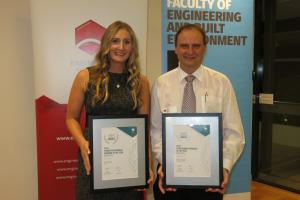 Peter Stepien, Senior Research and Development Engineer, ResTech, was named 2019 Professional Engineer of the Year - Newcastle. Peter received a B.E. degree in Computer Engineering from the University of Newcastle and a Ph.D. degree from the University of Sydney. He has contributed on a significant scale to the High Frequency Earth Leakage Safety in mines. Peter has worked to change the electrical codes through his involvement in Standards Australia and assisted with the implementation of these changes through his role in Restech dealing directly with mine sites throughout NSW.

Sarah Gray, Network Operations Engineer, Hunter Water, was named 2019 Young Professional Engineer of the Year - Newcastle. Sarah completed a degree in Bachelor of Engineering (Honours) (Civil) at The University of Newcastle. She joined Hunter Water in 2011. She is heavily invested in the well-being of people and community in Newcastle and beyond. Her Winnovators Challenge activities in Columbia to her local Merewether Surf lifesaving show a dedication to make a difference. Sarah has used innovative approaches to resolving engineering problems in her workplace during emergency water outages including the introduction of new valves that are now part of the working infrastructure to alleviate flow problems in future emergency water events.

These awards align with our organization’s centenary, providing a platform to celebrate all local engineers – past, present and future. Both winners will compete for the National title which will be announced in November at the World Engineers Convention in Melbourne.