The Construction of the Sydney Harbour Bridge available now on DVD

The Sydney Harbour Bridge is testament to the endurance and foresight of Sydney as a city, to unite the northern and southern shores of the harbour, to present the lasting strength of infrastructure technology and to continue to influence and inspire society.
News Image 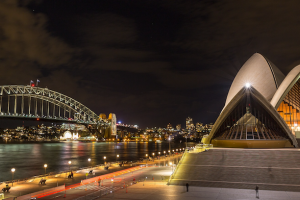 The Sydney Harbour Bridge is testament to the endurance and foresight of Sydney as a city, to unite the northern and southern shores of the harbour, to present the lasting strength of infrastructure technology and to continue to influence and inspire society.  It is also testament to the impact of engineering to go beyond being just its matter – in this case, a set of girders and bolts - and to become the symbol for a city and a nation.

The task of construction was formidable and it took nine years for the bridge’s completion - opening on 19 January 1932. At the time of its being built, Sydney was still a comparatively small city, and had a population that did not yet match the demand that the bridge’s wide eight-lane span would provide for. It was only in 2012 with the construction of the Port Mann Bridge in Vancouver that the Sydney Harbour Bridge’s record as the widest long-span bridge was surpassed. The Sydney Harbour Bridge span today carries on average 160,000 vehicles per day compared to 11,000 in 1932. This excellence in design was able to recognise how vast the city was to become.

The Bridge stands today as an iconic landmark of the Sydney city landscape. The structure is an impressive two 28-panel through-arch structure of 52,000 tonnes of steel joined by 6 million hand-driven rivets (the largest weighing 3.5kg and 39.5cm in length). It is anchored by four specially-reinforced 12 metre deep bearings beneath a pair of 89m high Moruya granite-faced pylons. Its design and construction stands as milestone in engineering achievement and has been recognised as a National Engineering Landmark and an International Historic Civil Engineering Landmark.

In 1930, as the two halves of the Sydney Harbour Bridge reached towards each other, Henri Mallard, a Sydney photographer, began filming the construction of the bridge. Allowed access to all areas of the site, Mallard filmed virtually every stage of the building process.

This original black & white silent movie has been copied to DVD together with commentary by Frank Litchfield, one of the supervising engineers. This historic recording together with other bridge celebrations is available as a 45 minute film on DVD and can be obtained from Engineers Australia.

If you would like to order a copy of the DVD for $30 + GST including postage, please email Sydney Division at [email protected]

Engineers Australia also has the original Henri Mallard film on Betacam tape and makes it available for commercial use to film makers and advertisers. The film is available at negotiable commercial rates.