Skip to main content
Back to Home
If you have recently been approved for your membership with Engineers Australia and are expecting to receive your new membership pack, please be aware that there may some delays, as the ACT is currently in lockdown due to COVID restrictions. Thank you.

Cure for the drawbacks of Li-Ion batteries 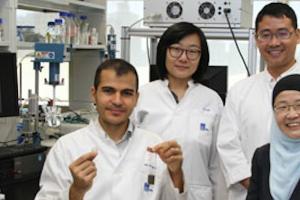 A team from the Institute of Bioengineering and Nanotechnology (IBN) at A*STAR in Singapore have invented a generalised method of producing anode materials for lithium-ion batteries. The anodes are made from metal oxide nanosheets, which are ultrathin, two-dimensional materials with excellent electrochemical and mechanical properties.

50,000 times thinner than a sheet of paper, the nanosheets allow faster charging of power compared to current battery technology. Their wide surface area makes better contact with the electrolyte, thus increasing the storage capacity. The material is also highly durable and does not break easily, which improves the battery shelf life.

Graphene oxide, a 2D carbon material with chemical reactivity that facilities the growth of metal oxides on its surface, was used as the template to grow metal oxides into nanosheet structures via a simple mixing process, followed by heat treatment. The researchers were able to synthesize a wide variety of metal oxides as nanosheets, with control over the composition and properties.

The new technique takes just one day to produce the nanosheets, compared to a week for previously reported methods. It does not require the use of a pressure chamber and has just two steps in the synthesis process, making the nanosheets easy to manufacture on a large scale.

“Our nanosheets have shown great promise for use as lithium-ion anodes,” said IBN Executive Director Professor Jackie Ying. "This new method could be the next step toward the development of metal oxide nanosheets for high performance lithium-ion batteries. It can also be used to advance other applications in energy storage, catalysis and sensors.”