The disappearing legacy of Harold Irwin

Imagine it's the early 20th century and you head out to the bush without a phone, electricity, concrete pump, chainsaw or even a nail gun, with the intention of building a major structure based on a few rudimentary drawings. Civil engineer Harold Irwin did just that.
News Image 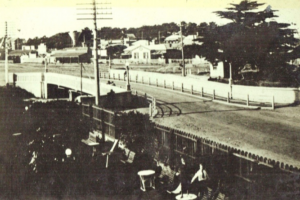 Imagine it's the early 20th century and you head out to the bush without a phone, electricity, concrete pump, chainsaw or even a nail gun, with the intention of building a major structure based on a few rudimentary drawings. Civil engineer Harold Irwin did just that.

What's more, some of Mr Irwin's bridges are still standing 100 years later, but he did have a knack of building structures that were demolished for road works many decades later. He was also responsible for the completion of at least one dam and major irrigation channels in the 1920's. After his death in 1962, all that was known about Harold Irwin's career were in two small photo albums and a framed display. These gathered dust for more than 50 years until the treasure trove of bridge construction images were seen by his grandson, Patrick Irwin, a forensic structural engineer and Fellow of Engineers Australia.

The images reveal a world of draught horses, traction engines, and ingenious improvisation by men working in jackets and waistcoats. Mr Irwin's grandson got together with VicRoads engineer Andrew Boak and the pair went on a journey of discovery to unearth Harold Irwin's works, which eventually led to a book on the engineer from Ballarat.

The first major reinforced concrete bridge built by Harold Irwin in Victoria was the Mordialloc creek crossing of the Nepean Highway (pictured at opening). It replaced a shaky old timber bridge and was opened in 1919. It was demolished in 2008 but Patrick Irwin had inspected the bridge a year earlier.

"The piles had suffered but most of the original concrete work was in surprisingly good condition," he explained. "This was a difficult construction with deep piles and pile caps on the stream bed."

Harold Irwin built the Pyrenees Highway Bridge over the Tullaroop Creek (Deep Creek) at Carisbrook about 7 km east of Maryborough in western Victoria. While the roadway has been widened all of his original work except the railings, remain. This includes the quality of the concrete.

In 1925, Harold Irwin completed the James Patterson Bridge in Charlton, a five-span reinforced concrete bridge on the Calder Highway over the Avoca River north-west of Bendigo, which still stands today and has withstood many major floods over its 95-year lifespan.

Want to know more about Harold Irwin's long lost bridges and structures and see some amazing photographs from a bygone construction era?

You can read the full story by Patrick Irwin in the free to read Engineers Heritage Australia Magazine. Editions from 2013 to 2020 of this digital magazine are available on EA's website and you can register at [email protected] for a free email subscription to future issues.