A team of engineers from Singapore is developing a prototype to produce purified water from seawater by harnessing the 'cold energy' of liquefied natural gas (LNG).
News Image 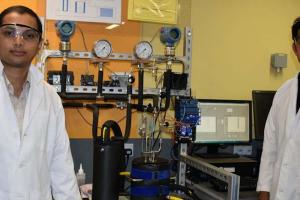 A team of engineers from Singapore is developing a prototype to produce purified water from seawater by harnessing the 'cold energy' of liquefied natural gas (LNG).

Natural gas is transported from producing countries like Australia to places like Singapore in liquefied form by cooling it to -162˚C. It is then turned back into gas at LNG terminals by using seawater to raise its temperature to 20˚C.

The team from the National University of Singapore's Centre for Energy Research and Technology is using gas hydrate based desalination (HBD) technology to purify the seawater at the same time as the LNG is being turned back into gas.

Gas hydrate are cages made up of water molecules with gas/liquid molecules (such as carbon dioxide methane, propane, cyclopentane) trapped inside these cages at high pressure and low temperature conditions.

Salts and other impurities are naturally rejected during hydrate crystal formation. These crystals can be separated from leftover brine (when seawater is used as feed) and dissociated to recover the gas/liquid molecules and purified water.

HBD was proposed several decades ago as a potential technology for desalination but successful commercialisation of this process has not happened due to the slow kinetics of hydrate formation, crystal separation from concentrated brine solution and cold energy required for the process.

“Our research team is developing a new technique that employs fixed porous beds made up of sand and water," said Praveen Linga, Assistant Professor of Chemical and Biomolecular Engineering at NUS.

"When propane is employed as one of the hydrate formers in a gas mixture, hydrate crystals form above the silica sand bed. This results in both enhanced kinetics and a natural separation of crystals from the concentrated residual brine solution.”

By using cold energy from LNG for cooling the HBD process, it is possible to drastically reduce the energy requirement and make it economically feasible. The NUS team hopes to prove the process's economic and technical feasibility with their prototype.

Dr Praveen Linga (left) with Abhishek Nambiar at the Centre for Energy Research and Technology. Photo: National University of Singapore