A new report suggests that new levels of vehicle automation will increase traffic congestion in the foreseeable future, and it’s up to the automotive industry to enhance its collaboration in order to create a seamless transition as we reach these new levels of automation.
News Image 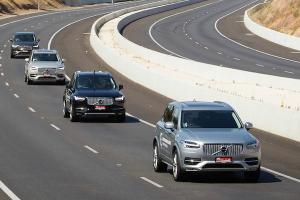 A new report suggests that new levels of vehicle automation will increase traffic congestion in the foreseeable future, and it’s up to the automotive industry to enhance its collaboration in order to create a seamless transition as we reach these new levels of automation.

The white paper produced by mapping company HERE and research agency SBD says there are two main factors that will determine just how big the impact automated vehicles will have on traffic congestion. The first is the level of vehicle automation. The second is the corresponding level of user adoption.

The report describes how levels of automation represent a sequence rather than a binary occurrence where one day the roads are exclusively filled with self-driving vehicles. According to SBD, 11 million cars in Europe, USA and China will be shipped in 2016 with driver assistance systems such as Adaptive Cruise Control, Automatic Emergency Braking or Lane Keep Assistance. From 2020, car manufacturers have announced a new generation of autonomous vehicles will be launched that achieve Level 4 to 5 automation, allowing drivers to handover control to the vehicle.

“Autonomous cars have the potential in the long-term to revolutionise mobility and radically improve the safety of our roads,” said SBD's Andrew Hart.

"However, the journey towards the fully autonomous car is full of potholes, which may create short-term pains in unexpected ways. The automotive industry and road authorities will need to work carefully together to navigate around these potholes, in order to gain the trust of consumers and reap the societal benefits of this new technology."

In order to help mitigate the increase in congestion during these transition periods, the authors urge the entire automotive industry to shift away from ‘each-to-their-own’ autonomy, where each car is responsible for itself, and towards Collaborative Autonomous Cars. This includes formalised efforts to break down information silos and establish vehicle, road network and infrastructure data exchanges in conjunction with local, state and national transportation agencies.

“But how we get to that objective and what it takes to get there, in terms of building the necessary digital infrastructure at scale, is a call to action for all of us in the auto industry. Greater collaboration is needed to ensure drivers and road operators alike can seamlessly transition into the era of automated vehicles.”

Transport/Infrastructure will be a major topic of discussion at the Australian Engineering Conference 2016 in Brisbane on November 23-25.