Electric vehicle batteries will be pocket-sized

The ultracapacitor-based battery will be able to charge within minutes and contains no environmentally harmful elements.
News Image 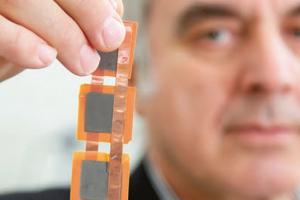 Engineers from UK-based start-up energy company UltraCap are in the final stages of developing a lightweight electric vehicle battery.

The company is hoping to replace current chemical-based batteries that are used in electric vehicles like the Tesla Model S with a series of ceramic dielectric capacitors. The final prototype battery from UltraCap will weigh less than 20 kg while delivering five hours of consecutive driving. In contrast, current Tesla Model S 70 kWh batteries weigh 535 kg.

According to company founder Professor Vladimir Krstic, the ultracapacitor-based battery would be able to charge within minutes, and the company is working towards even greater miniaturisation.

UltraCap engaged in a three-phase research and development program. Firstly, they developed bulk capacitor ceramics with high capacitance/dielectric constant to be used as reference materials.

The final step is focused on the development of dielectric films on metal substrate with good adherence to the metal substrate and possessing no pitting or discontinuities responsible for decrease in capacitance. UltraCap will use an ultrasound technology for mixing and grain refinement.

According to Professor Krstic, the ceramic battery can contain much more electricity in a smaller size than chemical-based batteries due to the multi-layered capacitor design, containing a ceramic di-electric non-conductor.

Furthermore, production of this next-generation battery will be cheaper and cleaner, making electric vehicles more affordable in future.

Krstic believes the technology can be improved further and that heavy chemical-based batteries will soon become redundant, "We can make the ceramic di-electric much thinner and lighter without losing electrical capacity and create pocket size car batteries in the near future. The technology has the potential to revolutionize the way electrical energy is stored and transported.

"Due to high energy density and small size, it will be possible to charge the device in all regions of the world where electricity is abundant and inexpensive and then transport it to urban areas where it is needed the most."