This afternoon at the International Astronautical Congress in Adelaide, SpaceX CEO Elon Musk outlined his vision for how he hopes to land a rocket on Mars by 2022.
News Image 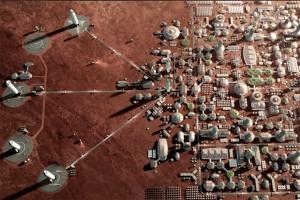 This afternoon at the International Astronautical Congress in Adelaide, SpaceX CEO Elon Musk outlined his vision for how he hopes to land a rocket on Mars by 2022.

Musk says they are developing a rocket, codenamed BFR, capable of fulfilling all the company's jobs from delivering satellites into orbit and making deliveries to the International Space Station to missions to the Moon and Mars, and even high-speed travel around Earth.

This new rocket will replace the company's Falcon 9, Heavy and Dragon rockets. It will be much larger than those rockets at 48 m long and 9 m wide. The empty rocket will weigh about 85 t with a capacity to carry 1100 t of propellant and 150 t of payload.

Musk said a key technology to deliver this is automated rendezvous and docking.

"In order to refill the spaceship in orbit, you have to be able to rendezvous and dock with the spaceship with very high precision and transfer propellant," he said.

This gives SpaceX the option of sending a rocket which will ultimately be bound for Mars into orbit around the Earth, followed by another 'tanker' rocket which can refill the first rocket, allowing it to then make the journey from Earth orbit to Mars on a full tank.

Other key technologies include extremely efficient engines and sophisticated heat shield technology. With the latter, he stated over 99 per cent of the energy used in landing could be removed aerodynamically.

"The tooling for the main tanks has been ordered. The facility is being built. We will start construction of the first ship around the second quarter of next year."

He said he was reasonably confident they can complete the ship and be ready for launch in about five years but if not, it should be ready for the next Mars flight window two years later.

The first mission will confirm water resources, identify hazards and build support infrastructure for later flights. The second mission will start building a base for future expansion and set up a propellant production plant.

Musk says, with Mars's carbon dioxide atmosphere and subsurface ice, it should be possible to make methane and oxygen, the BRF's fuel, using the Sabatier process.

His final suggestion was that the BRF could also be used for transport on Earth, travelling at high-speed above the atmosphere, allowing for journeys between most places on Earth in under an hour with most journeys under 30 minutes.

[SpaceX's vision of what a settlement on Mars could look like. Image: SpaceX]