The installation of one of Australia's largest roof-based solar arrays is underway in South Australia, involving engineers and other support staff working across the top of a five-hectare building.
News Image 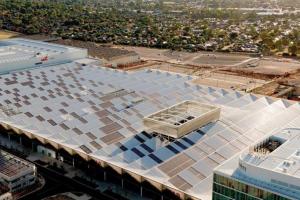 The installation of one of Australia's largest roof-based solar arrays is underway in South Australia, involving engineers and other support staff working across the top of a five-hectare building.

The solar array is part of the Tonsley District Energy Scheme, the state's first such scheme, located in the Tonsley Innovation District, a former car manufacturing site and TAFE SA building, in Adelaide.

The solar project will engage up to 40 engineers, installers, electricians and other staff as around 7400 panels are installed on the five-hectare roof of the Main Assembly Building of the Tonsley Innovation District. The district is home to research and education institutions, business and start-ups, enterprise incubators and accelerators as well as government bodies.

The plan is for Enwave Australia, the array's owner and operator, to invest about $40 million over five decades for battery storage, photovoltaics, smart technologies and electrical assets.

The state Minister for Energy and Mining, Dan van Holst Pellekaan explained the solar array would have a total installed capacity of 2.34MW and provide power for the entire Tonsley precinct, including residents.

He revealed that the current project is the first stage in a plan to increase solar generation capacity of the array up to as much as 6MW, which would be generated by 20,000 solar panels in the future.

“The solar energy installation will offset as much as 3500 tonnes of carbon dioxide emissions every year over its lifetime,” Mr van Holst Pellekaan said.

The system, part of a national landmark energy project, is set to optimise solar energy generation and will later expand to include recycled water for non-drinking purposes and natural gas for residences. Part of this project is the $11.4 million hydrogen park being developed as part of South Australia's Hydrogen Action Plan. This will utilise a 1.25 MW Siemens electrolyser to produce 100% hydrogen from electricity as the first Australian demonstration project of its scale and size.

South Australia currently leads the country in the uptake of wind energy and roof-top solar with renewable sources accounting for more than 50% of electricity generated in the state.