When Hobart was established as a town in 1804 on the western shore of the Derwent Estuary, the site would eventually pose challenges for bridge design engineers with a number of ideas proposed between 1824 and 1934.
News Image 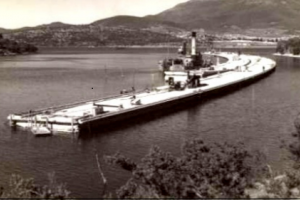 When Hobart was established as a town in 1804 on the western shore of the Derwent Estuary, the site would eventually pose challenges for bridge design engineers with a number of ideas proposed between 1824 and 1934.

A military floating bridge consisting of a long line of boats anchored upstream and downstream, with a timber deck spanning between them and a movable section which would allow ships to pass through, was touted in 1824. In 1926 a transporter bridge similar to the one over the Tees River in England was suggested. Then in 1930 there was a proposal for a straight concrete floating bridge anchored to the riverbed, and in 1934, a low level steel truss bridge with a bascule opening for ships was put forth.

The 1930 floating concrete bridge idea was the first affordable concept, however, trial anchors in the Derwent had proven unreliable due to the depth of water and deep soft mud below that. So local engineer, Alan Knight, came up with the first structurally feasible and affordable idea. He had joined the Tasmanian Public Works Department in 1932 as a bridge design engineer and had developed composite bridges in which the concrete deck was anchored to the supporting steel beams to give additional strength at less cost, which was a hugely successful design.

At the age of 26 Mr Knight was appointed Chief Engineer of the Public Works Department and his idea was to design the bridge as a three-pin arch, but this arch would be lying on its side and floating on the water. Its apex would point upstream so that it would be strong as an arch in compression when the tide flowed out and in tension (like a suspension bridge) when the tidal flow was upstream.

With strong pins (or hinges) at the abutments and the centre, the bridge would be able to resist incoming tides without the need for mid-stream anchors and could allow for the two- metre rise and fall of the tides. But the bridge would need a lift span as much of Tasmania's industrial infrastructure lay upstream from Hobart at the time. Another bridge was planned for road and rail upstream so Knight travelled to the US to investigate bridge lift spans for river traffic.

Want to know what happened next? You can read the full story in the free-to-read Engineers Heritage Australia Magazine and register at [email protected] for a free email subscription to future issues. Editions from 2013 to 2020 of this digital magazine are also available on EA's website.

Image: The two completed half arches parked in Geilston Bay. One of them is ready to be towed out into the river and moored to a buoy located where the apex of the arch would be. From the Tasmanian Archives and Heritage Office.