From engineer to philanthropist and global businessman

An electrical engineer-turned-financial expert has been awarded a Doctor of Engineering for his humanitarian endeavours and commitments to building and design.
News Image 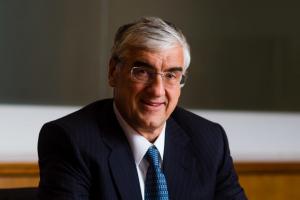 An electrical engineer-turned-financial expert has been awarded a Doctor of Engineering for his humanitarian endeavours and commitments to building and design.

Sir Michael Hintze AM, who holds a Bachelor of Engineering in Electrical Engineering and a Bachelor of Science in Physics and Pure Mathematics from the University of Sydney, was recently bestowed with the engineering doctorate from his alma mater. The specialist doctorate (honoris causa) is the second for the engineer who has a Doctor of Business from the University of NSW and holds a Master of Science in Acoustics from that university.

Following his undergraduate studies, Hintze served in the Australian Army and rose to the position of Captain in the Royal Australian Electrical and Mechanical Engineers. He became an electrical structure engineer for Civil & Civic in Australia before moving to the United States where he gained an MBA at Harvard Business School. Hintze later relocated to London to start his financial profession where he worked at Salomon Brothers, Credit Suisse, and Goldman Sachs. In 1999 he founded CQS, a global asset management firm, of which he remains the group executive chairman and senior investment officer.

The University of Sydney said Hintze is one of the world's best financial specialists and a notable humanitarian. His wide-ranging philanthropic activities have funded numerous charities and cultural organisations in the UK, established the Chair of International Security at the University of Sydney, and enabled the restoration of frescoes in one of the Vatican's chapels.

Hintz has enjoyed an enviable career and life that has included being made a Member of the Order of Australia in 2013 and receiving a knighthood for philanthropic services to the arts, the same year. However, it is clear he was drawn to the engineering profession early on as its principles of improving society for the good of all were similarly aligned with those of Hintze's family.

"Growing up in Australia, my grandmother instilled in me a natural obligation to give back – to family, to the community, to the church and beyond, [which] forms the basis of civil society," Hintze explained.

"It has been said that to ‘those to whom much has been given, much is expected.’ Believing this to be true, I have dedicated time and resources throughout my life to causes that reflect a set of personal values: protection for the most fragile in society; fostering aspiration; and respect for institutions."