Members of the Engineers Australia UK Chapter had the unique opportunity to hear about the UN Sustainable Development Goals (SDG) and the role of the World Federation of Engineering Organisations (WFEO).
News Image 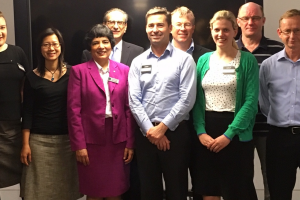 Members of the Engineers Australia UK Chapter had the unique opportunity to hear about the UN Sustainable Development Goals (SDG) and the role of the World Federation of Engineering Organisations (WFEO), in bringing together engineers from more than 90 countries and discuss global issues involving engineering.

Dr Marlene Kanga, President-elect of WFEO and former National President of Engineers Australia, provided insight into the active contribution being made at the highest engineering levels, in particular, WFEO and its Standing Technical Committees who are working towards achieving the SDGs through its work on energy, transport, infrastructure and information technology. It is also providing significant leadership in building capacity in engineering education in developing countries. Another global project is the development of statistical indicators on the participation of women in STEM to facilitate policy development.  WFEO has also played a significant role in fighting corruption in engineering projects with the successful development of the international anti-bribery standard, ISO37001, that was approved in April 2016.

Dr Kanga noted that 2018 will be the year of the Engineer in the UK and the 40th anniversary of the UK chapter, hence a good reason to celebrate with a significant technical event. She will also be President of WFEO which will be celebrating its 50th year with a conference and meetings in London in 2018.