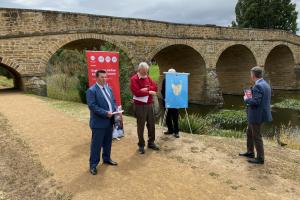 Major engineering sites across Tasmania have been recognised through the Engineering Heritage Markers of Tasmania map.

As Australia’s oldest surviving large stone arch bridge, completed in 1825, Richmond Bridge made an appropriate setting for the map’s launch.

According to Engineers Australia Acting-General Manager for Tasmania Darren Beattie, Richmond Bridge represents the ability of engineering to find a solution to an issue and lead to significant economic benefit.

“The completion of Richmond Bridge saw the town and its surrounds rapidly expand, marking the Richmond’s place as an important military outpost and transport hub for travellers moving between Hobart and Port Arthur”, said Mr. Beattie.

“Looking at the Heritage Markers listed on the Heritage Map, you can see many examples of engineering driving economic and social benefit for Tasmania”.

Mr. Beattie said that a growing interest locally, interstate and internationally in engineering excellence was driving a new form of tourism.

“We know from the success of Hydro Tasmania’s power station tours how keen people are in the history of engineering in Tasmania – Industrial Tourism is a growing sector within the overall industry.”

“Though some of these sites have been served their original purpose and been replaced or are no longer operating, others continue to provide good service and positive benefits to our State – but all sites have played a role in getting the state to where it is today.

“With markers scattered in the north, west and south of the State, and off the beaten track, visitors and locals interested in engineering heritage can now use the map to find the markers and read the historical information.”

The Engineering Heritage Markers of Tasmania Map is available in the Tasmanian Tourism Information Centre, and can also be viewed online.