Engineering much older in Australia than previously thought

It appears that engineering in Australia has been around a lot longer than the 250 years of European presence as a system of channels, weirs and dams thousands of years old have been discovered in Victoria.
News Image 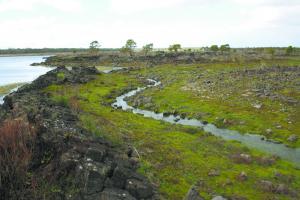 It appears that engineering in Australia has been around a lot longer than the 250 years of European presence as a system of channels, weirs and dams thousands of years old have been discovered in Victoria.

Archaeologists have been aware of the system in the Budj Bim Cultural Landscape for some time, leading to it being declared a UNESCO World Heritage Site last year. However, the full extent of the system, built out of volcanic rock, was revealed in December after a lightning strike ignited a bushfire over 790 hectares in size.

Since the fire stripped away the vegetation, the Gunditj Mirring, Traditional Owners Aboriginal Corporation found the system was much larger than what had been previously recorded. They said lava flows over the past 30,000 years from Budj Bim (formerly known as Mt Eccles), were cultivated by Gunditjmara peoples "to engineer one of the world's oldest freshwater aquaculture systems" in what is now south-western Victoria.

According to UNESCO, it is one of the world's most extensive and oldest known aquaculture systems and is made up of three components. It revealed that the system was based on deliberate redirection, modification and management of waterways and wetlands.

"Over a period of at least 6600 years the Gunditjmara created, manipulated and modified these local hydrological regimes and ecological systems," UNESCO explained.

"They utilised the abundant local volcanic rock to construct channels, weirs and dams and manage water flows in order to systematically trap, store and harvest kooyang (short-finned eels) and support enhancement of other food resources."

It is now known that the engineered aquaculture system has provided an economical and social base for Gunditjmara society for millennia. Who knows what other engineering feats might be uncovered across Australia's landscape in the future.