A budding engineer with a transformative vision for Sydney's urbanisation to provide a better living environment and cultural experiences has been awarded the 2019 Lendlease Bradfield Scholarship at the University of Sydney.
News Image 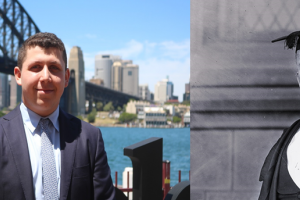 A budding engineer with a transformative vision for Sydney's urbanisation to provide a better living environment and cultural experiences has been awarded the 2019 Lendlease Bradfield Scholarship at the University of Sydney.

"We need to find all the benefits of urbanisation - without the drawbacks," James warned. "A great way to do this would be to create a sort off 'superblock' in which square sections of nine street blocks are grouped together to encourage more space for housing and public gardens."

He said small businesses like cafes, theatres, bars and galleries could be at street level, with all parking underground. James believes Sydney must offer a thriving live music culture, modern and inventive food scene, showcase sport and provide entertainment spectacles that are accessible to all.

Awarding the 2019 scholarship to James is timely as Sydney's cultural life has suffered enormously since the NSW Government introduced the inner city 'lock-out laws' in 2014. These are being scrapped in January 2020 for all areas except Kings Cross.

James' vision involves Sydney being at the forefront of innovation in its engineering, architecture, transport and urban development. He recommends a transformation in living density, with more people per square kilometre, instead of less, that would lead to more opportunity for cultural experiences. The city's public transport system must also be revitalised, according to James, while government policy needs to provide for individuals' living experiences.

The Lendlease scholarship was established in honour of innovative engineer, John Bradfield, who designed and oversaw the construction of the Sydney Harbour Bridge and its approaches as well as the city's underground City Circle railway.  Bradfield was responsible for Brisbane's Story Bridge and NSW's Cataract and Burrinjuck Dams.

In 1924, Dr Bradfield received the first doctor of science in engineering at the University of Sydney for his thesis on electric railways and the future harbour bridge. Lendlease said its scholarship offered engineering students a practical insight into big problems and allows them to discover that well-planned cities can be the greatest examples of human endeavour.