‘Engineers should be registered’: member voices drive the push for registration in NSW

An Engineers Australia member consultation and information session in Tamworth has proven to be a powerful agent for change in the debate for statutory registration of engineers in NSW.
News Image 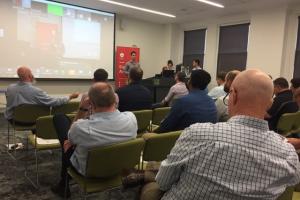 On the eve of an Engineers Australia regional consultation event in Tamworth, NSW Minister for Better Regulation and Innovation, Kevin Anderson, spoke publicly about his commitment to introduce a comprehensive scheme for the registration of engineers.

Local paper, The Northern Daily Leader, interviewed the local Tamworth MP, Minister Anderson, who reinforced his support for registration of all engineers.

"It’s beggars’ belief, I'm staggered it has not occurred previously so we are getting on with this report,” Mr Anderson was quoted in the article.

"I am absolutely committed to making this happen, it has not happened before ... engineers should be registered but we need to do it in a staged approach to address the critical issues."

During the event, Tamworth-based engineers along with many more on the live webcast, learned about the progress of efforts to introduce new laws to register engineers and provided feedback on how registration can work in NSW.

Mr Mobilio says the consultation was an opportunity for local engineers to engage with industry leaders and learn more about registration.

“We typically do site visits, to engage with members spread throughout our area. Registration came up many times during those site visits where people were asking ‘what's going on with registration in New South Wales and can we get an event here?’”

“So we decided to host an event to address the issue for local engineers.”

Mr Mobilio says after seeing the Minister’s comments he’s optimistic about seeing a registration scheme introduced in the state in the near future.

“Mr Anderson said he would like to see engineers registered and Engineers Australia would like to make it happen. He seems very supportive,” Mr Mobilio says.

“I think this provides a firmer footing for Engineers Australia in terms of getting registration in NSW over the line.”

“The Minister is clearly keen for his local community to understand how seriously he takes their concerns. It just goes to show the power of local consultation efforts,” he says.

As reported in The Northern Daily Leader, the Minister has said he will put his full support behind comprehensive registration of engineers. This commitment builds on a year-long process of advocacy by Engineers Australia on behalf of the profession.

“NSW Labor went to the last state election in March 2019 with a commitment to register engineers across all industries,” Mr Russell says.

“The challenge has always been to get to a point where both major parties are able to deliver the right policy outcomes together,” he says.

Twelve months ago, the Government support was for registration of engineers in the building sector only.  After intense advocacy by Engineers Australia — that has included a campaign aligned to the state election, multiple rounds of consultation with members, several appearances before Parliamentary inquiries and raising awareness through media—there are signs that bi-partisan support is building.

Mr Russell said he is pleased to have the Minister’s commitment to take action on registration, but acknowledged that there is still a lot of work to do.

The Government is expected to put its proposal for engineer registration to Parliament when it resumes in late March. Also, in March, the NSW Parliamentary Committee inquiry into Labor’s Professional Engineers Registration Bill is expected to table its report with recommendations.

These issues may soon be resolved and a clear way forward for engineering practice in NSW will emerge.

Mr Russell says during the recent Tamworth information session, he asked engineers if they supported a comprehensive scheme for engineer registration in NSW.

“When I asked people in the room, 100% raised their hands in support.”

Even with this level of support from members, Engineers Australia’s engagement with groups and engineers continues.

Right now, Engineers Australia is working on a state-wide program of consultation and information sessions. These sessions will ensure Engineers Australia hears directly from members on how registration should be implemented and help ensure members are fully informed on how proposed laws may affect them.