Australia’s Chief Scientist Dr Alan Finkel has unveiled his blueprint to optimise the National Electricity Market to the Council of Australian Government in Hobart.
News Image 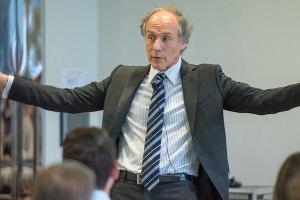 Australia’s Chief Scientist Dr Alan Finkel has unveiled his blueprint to optimise the National Electricity Market to the Council of Australian Government in Hobart.

“Our electricity system is entering an era where it must deal with changing priorities and evolving technologies. If the world around us is changing, we have to change with it. More of the same is not an option, we need to aim higher,” he said.

“If we adopt a strategic approach, we will have fewer local and regional problems, and can ensure that consumers pay the lowest possible prices over the long term.

Dr Finkel was joined by a panel including Terry Effeney and Chloe Munro from the electricity industry, Karen Moses from the Clean Energy Regulator and NSW Chief Scientist and Engineer Mary O'Kane.

They concluded that a Clean Energy Target is the most effective mechanism to reduce emissions while supporting security and reliability. Existing large electricity generators will be required to give a three years’ notice of closure. This will signal investment opportunities for new generation and give communities time to adjust to the loss of a large employer.

They also recommended a system-wide grid plan to inform network investment decisions and ensure security is preserved in each region. This would also include a list of potential priority projects to enable development of renewable energy zones.

The third key recommendation was a new Energy Security Board to drive implementation of the blueprint and deliver an annual health check on the state of the electricity system.

Engineers Australia Victorian President Chris Stoltz welcomed the report, describing it as profound but said the various governments must also focus on the immediate technological challenges around establishing a secure and affordable supply of electricity quickly.

"With no clear national transition strategy in place to avert an energy security crisis, Engineers Australia argues policy makers need to be looking at what assets are in operation now - or can be clawed back into operation very quickly - to get us through the next couple of years while investments in new technology roll out," Stoltz said.

He suggested increasing Victoria’s current battery storage tender from 20 MW to 100-200 MW and expanding the current demand response trial which can include connecting emergency generators to the grid and demand reduction, are changes that can be done by the end of December.

"South Australia’s power supply will be more secure than it has ever been with the full operation of Pelican Point and change in operating rules for the rest of the SA gas generators to make sure that they do perform the backup they are supposed to supply," he said.

The Finkel report is available here.