Engineers at the University of Sydney have developed a new method of turning durian and jackfruit into super-capacitors.
News Image 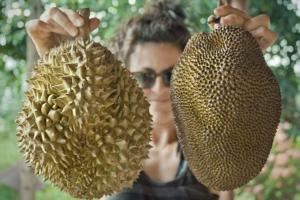 Imagine using fruit to charge your mobile phone. Engineers at the University of Sydney have developed a new method of turning durian and jackfruit into super-capacitors, which they say could substantially reduce energy storage costs and rapidly charge devices.

At present, super-capacitors are made from graphene-based materials, but Associate Professor Vincent Gomes from the School of Chemical and Biomolecular Engineering at USyd said these do not perform as well as the fruit waste and are much more expensive.

"The current super-capacitors are made from activated carbon which are nowhere near as efficient as the ones prepared during this project," A/Prof Gomes revealed.

Super-capacitors rapidly store large amounts of energy within a small battery-sized device and can supply energy to charge electronic devices. Compared to batteries, they are much more efficient, charge devices very quickly, and can do so in orders of magnitude greater charging cycles than conventional devices.

So, why use the notoriously pungent durian and the less odorous jackfruit? Both are indigenous to South-East Asia and grow in northern tropical areas of Australia. Durian weighs 1-3 kg while jackfruit can grow 5-15 kg  on average. They provide "outstanding performance" due to their large surface area, mesoporous structure and intrinsic nitrogen, according to the study.

The engineering team was able to convert the fruits' bio-waste into super-capacitors through their chemical-free, green synthesis protocol.

"Using a non-toxic and non-hazardous green engineering method that used heating in water and freeze-drying of the fruits' biomass, the durian and jackfruit were transformed into stable carbon aerogels – an extremely light and porous synthetic material used for a range of applications," A/Prof Gomes said.

Carbon aerogels make great super-capacitors because they are highly porous, he added. These aerogels were then used to make electrodes that were tested for their energy storage properties which were found to be "exceptional".

The study, 'Aerogel from fruit biowaste produces ultracapacitors with high energy density and stability', was published in the Journal of Energy Storage in February 2020.