The future of agriculture is in robotic farmers

According to leading roboticist, Professor Salah Sukkarieh, robotic technology, in combination with digital data, will deliver sustainable agriculture, and help feed the planet, even as global population is projected to reach 9 billion by 2050.
News Image 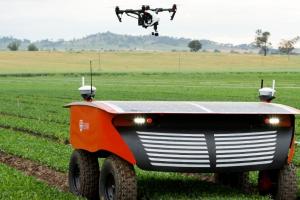 According to leading roboticist, Professor Salah Sukkarieh, robotic technology, in combination with digital data, will deliver sustainable agriculture, and help feed the planet, even as global population is projected to reach 9 billion by 2050.

Professor Sukkarieh will present his ideas at the Falling Walls conference in Berlin, set to run from 8 to 9 November in 2016. The event will bring together world leaders in science, business, politics and the arts.

Professor Sukkarieh is the Director of Research and Innovation at the Australian Centre for Field Robotics, as well as a Professor Robotics and Intelligent Systems at the University of Sydney. He is an international expert in the emerging field of agricultural robotics, autonomous systems that can operate in outdoor environments and provide support with crop and livestock farming.

With his group of researchers, Professor Sukkarieh designs self-driving farmbots and autonomous drones that collect and analyse data and perform automated tasks in the field, increasing efficiency and crop yield, and pioneering the way to the future of farming.

According to Professor Sukkarieh, the immense challenge of sustainably feeding a burgeoning population means agricultural innovation needs to move forward faster than ever. This is especially true because the agricultural labour force continues to shrink, with the average age of the farmer increasing.

In both large-scale farming operations and family farms, new technologies are already being leveraged, including drones, sensors and big-data analytics. According to Professor Sukkarieh, the next generation of farmers could well be autonomous robots, capable of herding cattle, harvesting fruit and surveying crops.

Citing the Australian experience, Professor Sukkarieh will discuss how investment in agricultural robotic technology, research and education is paying dividends.

"Fortunately the sector has recognised the need for change and is adapting to and adopting new technologies," he said.

“Over the past decade we have assisted both large-scale industrial operations in the implementation of sensors and big data analytics, and worked with industry research partners and small family-run farms across the country. Robotic technologies are already being trialled on properties across Australia and it will only be a matter of years before they are commercially available at affordable prices."

Professor Sukkarieh says the biggest challenge is to to increase technology adoption through various channels such as open sourcing, direct commercialisation and the sharing of technology across multiple farm operations.

"Also paramount is the education and training of future generations of producers in developed and developing nations. We need to focus on technology and innovation in our junior schools," he pointed out.