There have been many historic instances where professionals have had others take credit for their work, disappearing quietly into dusty archives as decades or centuries pass until someone like an inquisitive engineer brings them to light.
News Image 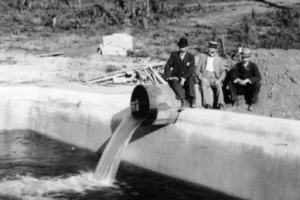 There have been many historic instances where professionals have had others take credit for their work, disappearing quietly into dusty archives as decades or centuries pass until someone like an inquisitive engineer brings them to light.

Such is the case with two engineers who worked in Western Australia on the Goldfields Water Supply Scheme whose lack of recognition was corrected by the actions of a retired American mining engineer, Dave Gilbert. Mr Gilbert had worked in WA in the 1970s and visited the scheme in 2007. At the time he was a member of the History and Heritage Committee of the American Society of Civil Engineers (ASCE) and soon became instrumental in the senior engineers on the scheme finally being recognised for their work more than a century later.

The Engineer-in-Chief of WA's Goldfields Water Supply Scheme was Charles Y. O'Connor and the Engineer-in-Charge was Thomas C. Hodgson, an hydraulics engineer who was involved in the investigation, design and construction management of the project since its inception in 1895 until 1902.

The records tell us Charles O'Connor's untimely death came in March 1902, and then his deputy, Hodgson, was forced to resign in controversial circumstances from the Public Works Department WA in May 1902. This was seven months before the project was completed and, consequently, Mr Hodgson was not invited to the opening ceremony in January 1903 while his major contribution to the Goldfields Water Supply Scheme remained unacknowledged.

Want to know how Dave Gilbert and the ASCE came to be instrumental in the recognition of two Australian engineers from the turn of the 20th century?

You can read the full story in the free-to-read Engineers Heritage Australia Magazine and registerat [email protected] for a free email subscription to future issues. Editions from 2013 to 2020 of this digital magazine are also available on EA's website.