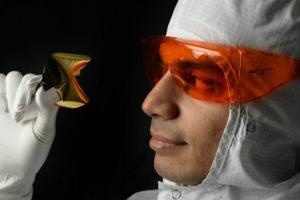 "When I learnt that I had made the list, I was quite excited," said Sriram.

"While our work had received a lot of recognition for its innovation overseas, this was the first such recognition within Australia. It having come from Australia's peak engineering body was the icing on the cake."

Nominations for the 2017 listing of Australia's Most Innovative Engineers are now open and innovators like Sharath Sriram are encouraged to enter.

"Information is normally stored in memories digitally as a collection of '0's and '1's," he said.

He says his family and work colleagues were all very proud of him making the listing.

"I actually learnt that I had been named on this select list from the Executive Dean of Engineering at RMIT University," he said.

"He was very pleased to have seen a RMIT researcher and academic on this list, and for me having made this list at a relatively early career stage. My work colleagues were thrilled, and the reality is all our outcomes are team efforts. The recognition for me was something shared with the entire team."

Sriram says he will be encouraging those around him to nominate this year.

"My research team works on transparent electronic patches that one wears on the skin to monitor the environment and the human body," he said.

"This work is led by my colleague and a leading female engineer. I will certainly be getting her to nominate."

Nominations are now open and will close on 10 March, 2017 so it is important to start working on your entry now.

Details on how to nominate can be found at: bit.ly/innovative17