Google software engineer Tamina Pitt is determined to break down barriers and forge a ground-breaking trail for other women and Indigenous people to follow.
News Image 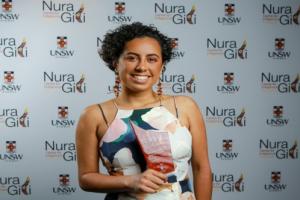 Google software engineer Tamina Pitt is determined to break down barriers and forge a ground-breaking trail for other women and Indigenous people to follow.

"What inspires me most about engineering is that engineers create the things that people interact with every day … I want to add my perspectives to the mix so we can create better products that appeal to, and help, a wider diversity of people," she said.

Having completed her UNSW Computer Engineering degree in 2019, Tamina was offered a role at Google in Sydney as an engineer in the Google Maps team working on the Directions Platform that provides directions for users.

It was her "absolute love of maths" that hooked her into engineering early on, starting first down the electrical engineering path. In her second year of uni, Tamina switched to computer engineering after a "fantastic compulsory computing course" but found herself as one of a few women in the course and the only Indigenous student.

She has found herself somewhat of a diversity and inclusion pioneer who plans to capitalise on her successes to further strengthen diversity in STEM careers and industries. Tamina has been the recipient of a number of awards despite it being so early in her engineering career, winning the 2018 NAIDOC Youth of the Year award; Spirit Award at the 2019 UNSW Indigenous Awards; and the Engineers Australia Outstanding Student Award in 2019.

At the time Tamina said she was, "so excited that Engineers Australia has sponsored this award as the leading voice for engineers in Australia".

"It means so much that they would sponsor this award and show their valued commitment to Indigenous people working in and studying engineering," she added.

While Tamina grew up in Sydney, her people are the Wuthathi of North Queensland and the Meriam Mir from the Torres Strait Islands. Her engineering Honours thesis topic reflected exactly what she's about.

"I wanted to explore how Indigenous perspectives can affect the design of technology. I think that many Australians … tend to think of ours as a culture [Indigenous] that stays in the past and is not moving into the future. But that just isn't true."

She said Indigenous people are avid users of social media to connect with their culture and each other and believes it is vital to have a range of diverse voices in technology design teams.

"From what I can see, the world and its power structures are changing. Nobody can ignore the fact that women, Indigenous people, and other marginalised people are taking power back. If industries don't adapt to this they'll be left behind," Tamina said.