We caught up with one of Rockhampton's longest serving members. Dr Ray Boyle, FIEAust CPEng(Ret), is a Fellow who first joined Engineers Australia on the 16 October 1950
News Image

How much has the profession changed since becoming a member?

The most exciting change has been the availability of the internet to provide training on line. While large employers maintained adequate technical libraries, the internet has made available material about which engineers in regional centers could but dream.

I mention training below and the Profession (especially in Central Queensland) can be proud that it was the Local Group which had the vision to lobby for the establishment of tertiary education in Central Queensland. It was the Rockhampton Group under Chairman James Goldston which fought for the establishment of a local University and won the setting up of a local branch of the Queensland Institute of Brisbane.  Jim’s work and that of his successor Bruce Hiskens resulted, over a period of years, in the establishment of the Capricornia Institute of Advance Education, the University of Central Queensland and currently The Central Queensland University (CQU).Unfortunately the work of these two engineers is not clearly acknowledged by the current leaders of CQU except that the Rockhampton Group commissioned a painting of Jim which hangs in the foyer of the Engineering building [formerly known as The James Goldston Building] and a plaque honoring Bruce is in the foyer of the University Library[formerly the Bruce Hiskens Library].

As Chairman of the Institute Council and later as the first Chancellor of the University College of Central Queensland Bruce Hiskens devoted many hours and much travelling to and from Gladstone and when asked why he had devoted so much time to the office replied that ‘I did not want others to go through what we went through’ referring to the many hours of travel we students from Mount Morgan had committed to attend night classes at Rockhampton.

Seventy years ago, while there was a central body based in Canberra and with a Division in Brisbane each Regional Group appeared to be autonomous in setting its program of activities. Regular monthly meetings included organized visits to operating plants, projects and addresses by in-house speakers and visiting ‘dignities’ who could be co-opted  at short notice to address the Group. Special social events including family participation ensured families were included in our professional doings,

The recent relocation of engineering personnel out of the district coupled with stricter control of event planning by Brisbane has seen a disappointing drop in the social and academic events put on by Regional Groups. Freeing up of Brisbane control to permit a less regimented approach to the organization of ‘ah hoc’ meetings by Groups would be to advantage.

What is your fondest memory of Engineers Australia?

I was 20 years old when I became a Student Member while in my third year of my apprenticeship. The senior staff (from the General Manager down) who were members welcomed me and made me a feel a part of the group and included me in all the group activities. Through their encouragement I was included in all the activities of the Rockhampton/Mount Morgan Group. These activities enable me to undertake visits to engineering works (the new bridge across the Fitzroy River, the construction of the new Glenmore Power station, the Rail Deviation to replace the ABT Rack railway up the mountain and Rockhampton extensions to civic infrastructure were under way). These visits broadened my knowledge of ‘real’ engineering and was a valuable contribution to the engineering course I was undertaking. Even after I resigned my membership I was, by default, included in the local group activities which the GM saw as part of my training.

The Mount Morgan Group was very active and enabled me to form friendships which lasted for years.

Where and what did you study?

See my tertiary education progress below.

After completing the Senior Public Certificate at the Rockhampton Grammar School I was offered a Fitting and Turning apprenticeship with Mount Morgan Limited on condition that I enrolled in the Diploma of Mechanical and Electrical Engineering [DipMEE] offered by the University of Queensland through  night time attendance at the Rockhampton Technical College. 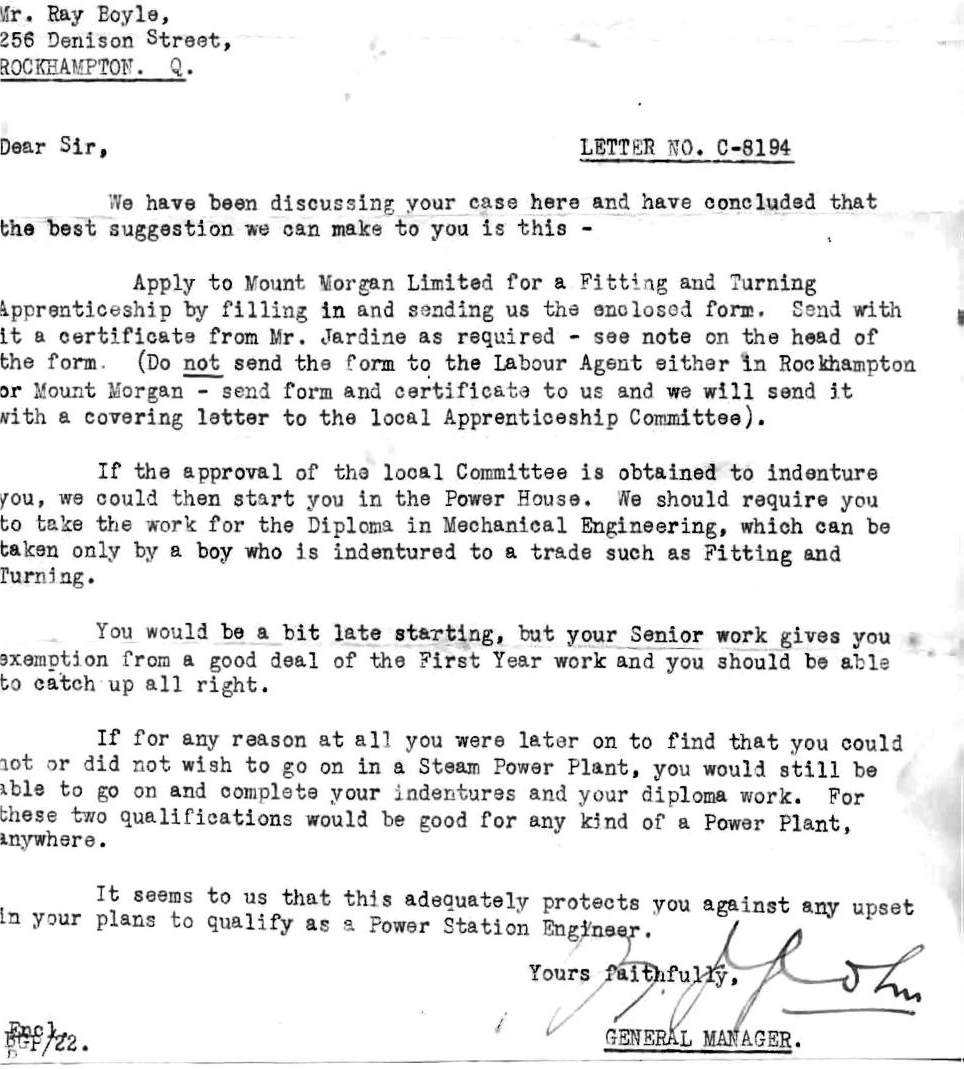 The DipMEE goes as far back as the early 1920s and was open to mechanical and electrical apprentices and to tradesmen of these disciplines; the student had to prove each year as he enrolled that he was he was still employed in the particular calling. The course was open to those holding the Queensland Junior Public Certificate and early subjects in the course were taken from that certificate. Holders of Senior were exempted from these subjects. The course was 4 years of 35 week duration. Holders of the diploma were able to sit for the (then) IEAust in-house subjects to gain admission to the Institution.

A number of MML apprentices enrolled in the DipMEE and went on to hold senior engineering positions around Australia. Capricornia Electricity encouraged their cadets and apprentices to use the DipMEE as a stepping stone to senior management with the Board (Noel Tudman, Merv Nash, Rol Oxenham) as did the Railways (Jim Goldston held a DipMEE), Lakes Creek meatworks (Keith Watts) and even some smaller engineering  works (Peter Twigg of Burns and Twigg held the diploma).

By the time I was finished the Diploma, completing the course did not qualify the student to sit for the IEAust subjects.

I found myself in this position and enrolled in the new 7 year Associate Diploma in Mechanical Engineering but an overseas study tour on behalf of Mount Morgan   and secondment to a company subsidiary in NSW delayed my enrolment. I commenced the course part time through the Queensland Institute of Technology Brisbane from 1963 to 1966 and when the Institute in Rockhampton gained autonomy, through the Rockhampton campus of the Capricornia Institute of Advanced Education, again part-time equivalent to three nights a week.

I completed the course in 1969 and graduated that year.

I applied for Graduate Membership in September 1970.

What do you think is the biggest innovation to have come out of Australian engineering?

I would not presume to make a choice but rather refer you to the wonderful selections made in 'Wonders never cease, 100 Australian engineering achievements', Engineers Australia [IEAust] Centenary Book published to celebrate the Centenary of the Institution, 2019, ISNB 978-1-025627-30-5.

What do you enjoy doing now?

Leading up to my formal retirement in 2000 and continuing in part up to the present time, I have expanded my attention to engineering heritage especially on the engineering history of the Mount Morgan mine. This has presented itself in delivering papers at engineering and other conferences as well as the publication of engineering history especially in the Institute of Mining and Metallurgy Bulletin and, through the good offices of the Editor, Margret Doring, in the EAH magazine.

[See my abridged CV for a listing of these articles/conference].

I have been a long-term member of the Australasian Institute of Mining and Metallurgy (since 1952) and in 1990 through that membership I was approached by the late Sir Arvi Parbo the (then) President to prepare a short paper on The Mining Heritage of Central Queensland which he used as part of a series of Presidential addresses delivered to Branches throughout Australasia. The work of preparing this paper made me realise the contribution engineers of all disciplines had made to the heritage of the mining industry.

While still employed by the University, encouraged by this realization, and with my Dean’s support, I undertook part-time research into the history of the closure of the Mount Morgan Gold Mining Company Limited and the first twenty-one years of the life its successor, Mount Morgan Limited. The resulting thesis was A Study of the Management and Growth Patterns of Mount Morgan Limited, 1929-1950 for which I was awarded a Master of Arts degree by CQU in 1994.

For the next ten years I was content preparing the articles listed in my CV until, in 2004, I realized that most people were unaware of the reasons for the success or failure of Mount Morgan Limited, and of the management decisions that ultimately affected the lives and prosperity of the Mount Morgan community. Consequently, there have been areas of narration, especially in this latter period, which have drawn either praise or criticism, often without sufficient and accurate historical detail by way of comparison.  By examining areas of ‘praise or criticism’ in the operation of Mount Morgan Limited, and placing these within the context of the broader mining community, I enrolled in a PhD with CQU to prepare a new analysis of the history of the mine.

The resulting thesis ‘Mount Morgan Limited, The Triumphs and Disappointments, 1932- 1990’ was submitted and I was admitted to a PhD in 2014.

While the research is family based, each of the above analyses the history of the areas in which each of the family lived and their contribution to that history.