The legacy of the WA Centenary Gala dinner

On Thursday 1 August we marked 100 years of Engineers Australia at Optus Stadium, Perth. During this momentous occasion we also celebrated local engineers through the announcement of the 2019 Engineer of the Year - WA award winners.
News Image 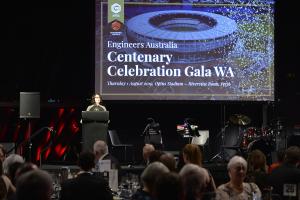 2019 is the year of Engineers Australia Centenary but 1 August was especially significant as this was the date the Institution was formally created 100 years ago.

In Western Australia, EA hosted a spectacular gala dinner at Optus Stadium with a specially curated performance by Professor Alan Harvey and members of the Perth Symphony Orchestra.  Thanks to our sponsor the Water Corporation, the entry was decorated with electronic display panels showing photos of WA water engineering projects over the last 100 years.

Special moments included watching the Centenary video beamed across the Stadium via the biggest super screens in the southern hemisphere (spanning 340 square metres!) and witnessing 320 voices singing We Are The Champions as we celebrated the incredible contribution that engineers make to society.

Allison Selman was named 2019 Professional Engineer of the Year for WA.  Allison founded and runs the Women in Subsea and Engineering (WISE) professional network for the Offshore Oil & Gas industry, which has 400 members and now includes a collaborative Joint Industry Mentoring program.  She is also the founder of the WISE Future Engineers Program for female high school students, which in its second year, is running during the October school holidays with 50 participants.  WA Division Committee member Dr Gary Bryant received a high commendation.

Biomedical engineer Alex Hayes was named 2019 Young Professional Engineer of the Year for WA.  Alex co-founded a MedTech start-up to commercialise a novel medical device to treat abscesses without surgery. The simple, cost-effective device is ideal for low-cost healthcare settings such as rural and remote communities and has the potential to save the Australian healthcare system tens of millions of dollars annually.

As part of this momentous occasion, it was our pleasure to also present custom-made Centenary versions of the Engineers Australia Medal for meritorious service to stellar WA engineers Susan Murphy AO, James Trevelyan and Dr Francis Norman.