Despite its remoteness, Australia was at the forefront in taking up electric lighting in the 19th century, from applying electricity to the telegraph in the 1830s to electric light first demonstrated in 1845.
News Image 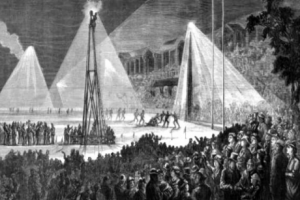 Despite its remoteness, Australia was at the forefront in taking up electric lighting in the 19th century, from applying electricity to the telegraph in the 1830s to electric light first demonstrated in 1845.

That first demonstration of electric light was by Dr James Kenworthy in Launceston in Tasmania, however, the first electrical engineers were the telegraph experts who understood batteries and circuits. There were two in particular who were pivotal to the developing technologies.

In 1855, Charles Todd, Superintendent of Telegraphs in South Australia, began experimenting with light and in 1860 demonstrated an arc lamp he had made to an audience of 800 people. Todd's former assistant, Edward Cracknell, became Superintendent of Telegraphs in NSW and displayed arc lighting from Sydney Harbour foreshore in 1863. Then in 1867, Todd lit up King William Street in Adelaide for the Duke of Edinburgh's visit, and a decade later, Cracknell tested a Siemens arc lamp that reached across Sydney Harbour to the North Shore in 1878. Around the same time, electric light was used for concerts on the Melbourne Cricket Ground and to light up night football there in 1879 (see image; source: State Library of Victoria).

The development of electric lighting that would see gas, oils and candles replaced in the late 19th century changed the world, and Australia remained at the forefront of this technology. By the end of the 1800s, 'cable' systems such as Edison tubes and overhead wiring with weatherproof insulation were being developed. Combined with the invention and development of the incandescent lamp, these became the catalyst for wider use of electric lighting.  Engineers in cities around the country were working on projects such as the establishment of the Victorian Electric Company in 1880; Tamworth's street light scheme in 1888; and the opening of the Perth Power Station in 1894.

All the early lighting schemes used DC, nominally 110 V for incandescent lighting, and up to 300 V for series connected arc lighting. Establishment of a vacuum globe enabled the carbon filaments in incandescent lights to become a commercial product, but later, carbon was superseded by tungsten. The advent of AC systems at the beginning of the 1900s made no difference to the incandescent light, which operated equally well on both systems.

So what happened as Australia entered the 20th century and who were the 'bright sparks' who helped light emerge from the shadows? For more on this see below.

You can read a comprehensive article on the development of electric lighting in Australia and view rare images all for free in Engineering Heritage Australia Magazine. Multiple editions of this digital magazine are also available on the EA website and you can also register at [email protected] for a free email subscription.