Engineers Australia is pleased to announce the list of Honorary Fellows for 2019.
News Image 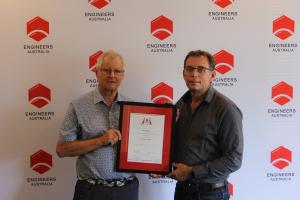 Engineers Australia is pleased to announce the list of Honorary Fellows for 2019.

Honorary Fellow is Engineers Australia’s highest membership grade and is conferred on a Fellow of Engineers Australia whom the Board desires to honour for having rendered conspicuous service to the Australian people or in recognition of outstanding achievement.

This year’s Honorary Fellow recipients have significant and wide-ranging experience and have throughout their careers demonstrated their commitment to the profession.

The 2019 group of Honorary Fellows are:

Professor Deletic led the development of several green nature‐based water treatment systems which are now widely adopted in Australia and abroad and was awarded the 2012 Victoria Prize for Science and Innovation for her outstanding achievements in stormwater research.
Engineers Australia’s create magazine profiled Professor Deletic as one of Australia's Most Innovative Engineers for 2017 for her pioneering ‘green‐blue wall’ work which examined green infrastructure as a way to get plants growing in urban areas without wasting water.

Andrew Leventhal - Sydney
Andrew Leventhal has contributed to the theory and practice of geotechnical engineering over many decades. He has also contributed significantly as a volunteer to the profession both nationally and locally through societies and the Sydney Division.

In June 2019, Andrew was appointed a Member of the Order of Australia (AM) for significant service to geotechnical engineering

Ian Maitland - Western Australia
Ian Maitland has been a practising structural engineer for 50 years and is an acknowledged expert in the field of heritage engineering.

The projects Mr Maitland has undertaken are enormously varied, including such icons as The Golden Pipeline pump-stations, Rottnest Island structures, timber bridges, cranes, buildings and ruins and the strengthening of Trinity Church.

He is one of only five engineers in Australia with registration in Heritage and Conservation Engineering and has been honoured with a 2016 Medal of the Order of Australia for services to Cultural Heritage and Structural Engineering and the 2012 John Monash Medal, Engineers Australia’s highest honour to an individual who has made an outstanding contribution to Engineering Heritage.

Jim Galvin - Queensland
Emeritus Professor James ‘Jim’ Galvin is an internationally-renowned mining and geotechnical engineer whose exceptional career has traversed not only industry and academia over more than four decades, but international boundaries. He is a world expert lending his capabilities to saving hundreds of lives in mining disasters and more.

Professor Galvin has been highly influential in improving mine design standards in the Australian coal industry and moved into academia in 1993 as Professor of Mining Engineering at UNSW before being appointed Head of School from 1995 to 2002. He established the UNSW Mining Research Centre.
He now operates his own international consultancy firm and continues to serve in many ongoing high-level professional positions.

May Ngui - Canberra
May Ngui is a chartered professional electrical engineer and Fellow of Engineers Australia.

With engineering consultancy experience in infrastructure design spanning over three decades, Ms Ngui has worked on a broad range of projects for numerous clients in Australia and around the world, including on an oil rig in the South China Sea and in a cement factory in pre-1989 rural China.

Elected by the shareholders of GHD to the GHD Board in 2009, she has served on the Board’s Risk, Audit, Nominations and Strategy committees and although having retired from the Board in November 2018, is a current member of the Risk Committee.

Roger Franzen - Canberra
Roger Franzen has made a real difference at the highest levels to Australian and International Space engineering. In a distinguished career he has served in various roles with over 28 years in Senior Engineering or Chief Executive positions across multiple agencies globally. Not only is he an extremely capable professional engineer, he has proved himself to be an outstanding leader, manager, team player and mentor, and is a credit to the engineering profession.

Through his engineering work Roger has delivered significant and lasting benefits to the global community. He is a strong advocate of supporting engineers of the future and is empathic and actively involved in ensuring that working environments are encouraging and respectful of the need for sensible work life balance.

Derek Abbott - South Australia
Professor Derek Abbott has made significant contributions to biomedical engineering and photonics. He has published over 300 journal articles, has 42 PhD completions and was a 2012 ARC Future Fellow (Level 3).

Professor Abbott has won several awards including the Stephen Cole the Elder Prize (1999), Tall Poppy Award (2004), David Dewhurst Medal (2015) for biomedical engineering, the Barry Inglis Medal (2018) for measurement science, and the M. A. Sargent Medal (2019) for eminence in engineering.