Latest research from Engineers Australia shows plummeting rates of secondary students taking up STEM (science, technology, engineering, maths) subjects is setting the nation up to fail as it transitions to a smart jobs economy.
News Image 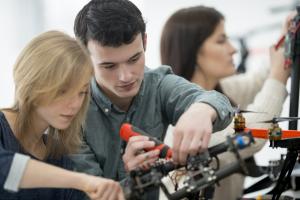 Latest research from Engineers Australia shows plummeting rates of secondary students taking up STEM (science, technology, engineering, maths) subjects is setting the nation up to fail as it transitions to a smart jobs economy.

The Engineers Make Things Happen report calls on Government to invest in an engineering pipeline strategy to try to reverse the decline.

The report’s findings show less than 6% of girls nationally studied physics in year 12, with advanced maths numbers almost as bad – 6.2% for girls and 11.5% for boys.

‘Australia faces enormous challenges as it transitions from a resources based economy to one that is diverse, innovative and technologically based.

‘The skills required to create and find work in this new economy will be significantly STEM based.

‘Alarmingly, our research shows less and less young people are studying the advanced science and maths subjects needed for these types of jobs – engineering is a case in point.’

The report outlines the urgent need to reverse these trends and train more engineers in Australia.

‘Currently we have no choice - filling engineering jobs here is excessively dependent on skilled migration. This ranks in stark contrast to other professions,’ Mr Stoltz said.

Report data shows 57% of engineers currently working in Australia were born overseas compared with 40% in other professions.

The report recommends an overhaul of the permanent skilled migration process to ensure migrant engineers have the right skills to match the nation’s engineering areas of need, such as in emerging technology.

The bulk of new engineers are permanent visa holders followed by graduates and temporary visa holders.

Mr Stoltz said Engineers Australia is urging the community and policy makers to accept the accelerating pace of change toward a STEM driven jobs market and the importance of building the nation’s capability to adapt and adopt to the change.

‘If we don’t - we will simply be left behind’, Mr Stoltz said.