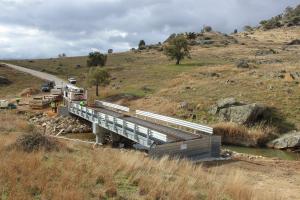 The InQuik Bridge System by SMEC and InQuik has been announced as the city’s top Engineering Excellence Award winner and Sir William Hudson Award finalist.

The InQuik Bridge System (‘the system’) is an Australian developed, semi-modular bridge solution. The system comprises two main parts: a steel tray and reinforcing cage forming the deck units with abutments and headstocks providing a complete bridge solution. These components are placed on-site then filled with concrete.

SMEC and InQuik Bridging Systems co-developed this new system through extensive engineering development, validation, and prototyping to maximise quality through pre-fabrication, ease of transport of lightweight forms and simple on-site concrete placement. The prototype was installed in June 2016, and a multi-span bridge delivered under market conditions installed at Parsonage Creek in mid-2019.

“These Australian Engineering Excellence Award winners showcase the outstanding achievement in engineering and the invaluable contribution engineering makes to the economy, community and the environment,” Ms Carter said.

“The InQuik Bridge System is and efficient and effective solution to a growing issue, particularly in the face of natural disasters and is a worthy contender for the national award.”

The Sir William Hudson Award, National Engineer of the Year Awards, and a multitude of other awards will be announced at Engineers Australia’s Pinnacle Awards ceremony, taking place on Monday 9 November 2020.