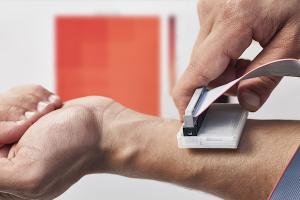 A low cost and non-invasive melanoma detection device has taken out this year's James Dyson Award.

The sKan was developed by a team of medical and bioengineering undergraduates from McMaster University in Ontario, Canada. While current diagnosis methods are based only on visual inspection, the sKan provides quantitative information about skin spots so that physicians can select appropriate patients for a biopsy.

The sKan is made up of 16 temperature-sensitive components called thermistors that look for areas of significant temperature difference on the skin, which may indicate risk of melanoma.

“We came across the issue of skin cancer and how technology hasn't had the same impact on its diagnosis as it has on other fields in medicine,” said team member Prateek Mathur, a graduate of McMaster’s Electrical and Biomedical Engineering program.

“We found research that used the thermal properties of cancerous skin tissue as a means of detecting melanoma. However, this was done using expensive lab equipment. We set out to apply the research and invent a way of performing the same assessment using a more cost-effective solution.”

Mathur and three classmates started the project as a final year engineering class exercise. They plan to use their US$40,000 prize money to reiterate and refine their design to ensure it passes the US Food and Drug Administration’s standards.

“By using widely available and inexpensive components, the sKan allows for melanoma skin cancer detection to be readily accessible to the many," said James Dyson, who personally selected the winner from a shortlist of 20 international finalists.

"It’s a very clever device with the potential to save lives around the world. This is why I have selected it at this year’s international winner.”

Twistlight, designed by German Tina Zimmer, uses LED lights to make veins appear highly contrasted within their surrounding dermal tissue. The light can be used to easily insert needles and catheters into a patient’s skin.