Molten salt offers a way to store large amounts of heat with relatively small volumes of fluid helping stabilise the supply of power from intermittent sources like solar.
News Image 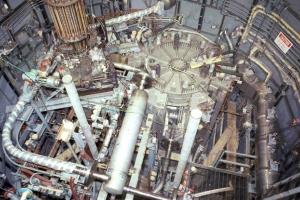 With the world’s need for energy continuing to grow, engineers are looking for solutions that not only increase the efficiency of power generation solutions, but also minimise risks to the environment. In both solar and nuclear power options, molten salt could hold the answer.

Molten salt offers a way to store large amounts of heat with relatively small volumes of fluid, helping stabilise the supply of power from intermittent sources like solar, and immunise nuclear reactors from meltdowns.

For concentrated solar power (CSP) generators, which store the sun’s energy as heat prior to conversion to electricity, molten salt allows these facilities to continue generating electricity even at night, due to its efficient storage of heat.

SolarReserve’s new 110 MW Crescent Dunes Solar Energy Plant in Nevada is one such plant. 10,347 heliostats track the sun, reflecting its energy precisely onto a receiver located on top of a tower.

Due to the system’s use of high nickel alloy materials, it is able to store a lot of heat with a relatively small amount of molten salt, helping reduce costs. The molten salt is heated to 566 degrees Celsius, a much higher temperature than previous molten salt storage systems.

After it’s heated, the hot fluid then moves through a heat transfer loop to drive a conventional steam turbine. The discharge fluid is then pumped from the turbine loop into tanks.

In this system, the heat from the discharge fluid can continue to produce power for 10 hours after the sun has set, allowing the plant to meet the electricity demand around the clock.

In next-generation molten salt nuclear reactors, uranium pellets are dissolved in molten salt, keeping the rate of fission stable and safe, and creating a self-correcting system.

In conjunction with other failsafes, such as control rods to absorb excess neutrons, a heat exchanger, a freeze plug, and a chemical filtration plant which removes fission products a molten salt reactor cannot go into meltdown.

China is currently working on developing a molten salt reactor, with a fully functional commercial launch by 2032.

Based on the molten salt reactor, engineers are also working on liquid thorium reactors, using thorium, which could produce 200 times the fuel efficiency as existing uranium-powered nuclear plants.