New documentary shining the light on female leadership in STEM

A new Australian documentary, ‘The Leadership’, tackles this issue head on by following female scientists on a voyage to Antarctica to uncover the obstacles and systematic inequalities that women face as leaders in STEM fields all around the world.
News Image 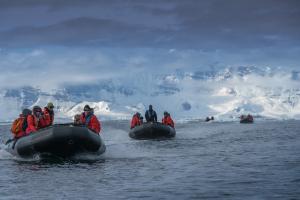 Only 13% of Australia’s engineering workforce are women; an alarming statistic when considering diversity as a tool to enhance the profession that is charged with making a difference in the world.

A new Australian documentary, ‘The Leadership’ , tackles this issue head on by following female scientists on a voyage to Antarctica to uncover the obstacles and systematic inequalities that women face as leaders in STEM fields all around the world.

The independent documentary by award-winning director Ili Baré, follows the journey of 76 women in STEM participating in the first Homeward Bound program.

Completed in 2016, the 21-day voyage from Argentina to Antarctica and back is one the largest expedition of female scientist leaders assembled and was developed and led by Australian leadership expert and social entrepreneur Fabian Dattner.

The Leadership tells the stories of several women on board as they embark on a journey of discovering their leadership style, but what they uncover is some troubling commonalities of gender biases faced while working in STEM.

The documentary had its world premiere at the virtual Sydney Film Festival in June 2020 and also screened as part of the digital Melbourne International Film Festival 68½.

Engineer and Engineers Australia Centenary Hero Professor Veena Sahajwalla HonFIEAust CPEng spoke on the documentary during a Sydney Film Festival in-depth online discussion and said “This is absolutely a serious issue ...It is sad when you actually see all these other situations tearing [women] down...what the film does beautifully is having these honest and transparent conversations.”

Engineers Australia WA President Jillian Formentin FIEAust CPEng EngExec NER will be joining a Q&A panel about women in STEM at a pre-screening of the ‘The Leadership’ film in WA on Tuesday 29 September.

On participating in the post-screening Q&A panel with other STEM leaders, Jillian said, “It will be a really important opportunity to discuss and deconstruct the challenges experienced by women in engineering and STEM.”

“I don’t know any women in engineering who do not have some kind of story to tell about harassment, unfair treatment or being minimised in the workplace. This documentary is a gritty roller-coaster, and I know many women, will be able to relate to it.”

When asked why women drop out of engineering after a few years of working, she said “Their choices are removed. People have endless choices to begin with, but their choices can easily be diminished either by experiencing harassment or being minimised or bullied in their place of work.”

“I know that men watching will also be moved to see the inequalities faced by women being played out on screen, and know that some will also be able to relate.

“It is important to make sure women and men are well equipped to deal when presented with these situations, she continued, “I hope that this documentary gives a voice to anyone who has ever felt they are not worthy of the profession”

Engineers Australia has a double pass to give away to special cinematic screenings of The Leadership in Perth, Sydney and Canberra from October. These will be awarded on a “first-in-best-dressed” basis to members who email [email protected].