The map of Australia's National Electricity Market highlights areas in the electricity grid where the future demand for power is expected to outstrip supply.
News Image 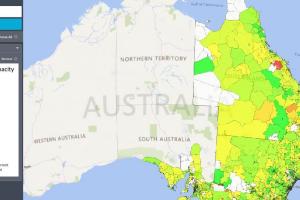 Companies involved in renewable energy, battery storage and power demand management can now identify the areas in Australia which have the greatest opportunities, thanks to a new map developed by the Institute for Sustainable Futures.

The free and publicly available map of Australia's National Electricity Market shows the expected available capacity across electricity distribution zones, highlighting areas in the electricity grid where the future demand for power is expected to outstrip supply.

These are often locations where renewables offer an alternative to extra poles and wires and can reduce power prices whilst increasing network stability.

The Network Opportunity Maps were developed by researchers at the UTS Institute for Sustainable Futures (ISF), and are hosted on CSIRO’s Data61 Australian Renewable Energy Mapping Infrastructure (AREMI) platform.

By helping entrepreneurs and companies to identify areas of opportunity in which to introduce or invest in decentralised energy resources and infrastructure, the maps are playing a part in bolstering the commercial viability of the renewable energy industry, and speeding up the transition to a low carbon energy system, while also helping lower electricity bills.

ISF Research Director Chris Dunstan said the Network Opportunity Maps provide a clear and comprehensive picture of the opportunities for energy-related investments for the period to 2025.

The Australian Renewable Energy Agency (ARENA) is providing $453,000 funding to support the development of the maps. The project is also receiving funding support from NSW Department of Industry, Ergon Energy and UTS. ElectraNet, Transgrid and Energy Networks Association are also supporting the project.

The project manager for the Network Opportunity Maps, ISF Research Principal Ed Langham said, “The maps aim to improve the efficiency of grid operation and build the market for demand management.”

“We are continuously exploring how to improve the maps to provide more and better information to help develop the network of the future, which will include high levels of renewable and local energy generation.”