No ordinary jobs for these women

Worldwide only 3% of commercial airline pilots and 10% of aerospace engineers are women so the aviation and aerospace sector in Australia has launched an advertising campaign to inspire more females into the sector.
News Image 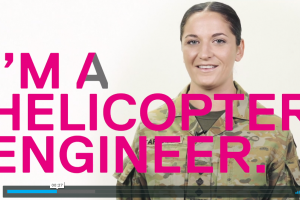 Worldwide only 3% of commercial airline pilots and 10% of aerospace engineers are women so the aviation and aerospace sector in Australia has launched an advertising campaign to inspire more females into the sector.

The campaign, which features Defence engineers and pilots; engineering and aerospace managers; and PhD students in aerospace engineering, was launched to coincide with International Women's Day. It follows in the wake of Engineers Australia's support of the WAI (Women in Aviation International) Conference in November and WAI's collaboration that saw all-female flight crews work 12 domestic flights on 8 March, assisted by female air traffic control and ground crew.

Driven by Aviation/Aerospace Australia, the current ad campaign includes a video (still image pictured), posters, website landing page, and a brochure for parents and teachers. The aim is to share this advertising collateral with young women to show them they can become whatever they want to be.

The thinking behind the campaign is to demonstrate a range of roles available for young women, with inspiring women already doing them. Tamara Bell, executive director of Aviation/Aerospace Australia, said the organisation set out to build awareness and provide answers to questions that girls, young women, and parents ask about the opportunities that are available.

"A career in aviation and aerospace is like no other," Bell explained. "From pilots to engineers, to exploring the skies and space, these are no ordinary jobs.”

GHO, the advertising agency behind the campaign, said girls aren't considering careers in the aviation and aerospace industries because they're "not aware of the scale and breadth of opportunities available to them - exciting well-paid careers with the ability to change the world for the better".

Engineers Australia's National Committee for Women in Engineering aims for the profession to become more inclusive and diverse, which values, supports and celebrates the contributions of women and men.