A drone big enough to carry a human passenger is now reality with Ehang displaying a 200 kg drone capable of the feat.
News Image 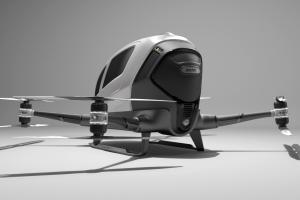 A drone big enough to carry a human passenger is now reality, with China-based manufacturer Ehang displaying a 200 kg drone capable of the feat at the CES technology trade show in Las Vegas.

A scaled up version of the remote controlled drones common today, the Ehang 184 Autonomous Aerial Vehicle utilises the standard quadcopter design, with a cabin that seats one person. A Microsoft Surface tablet/computer acts as its console.

The craft itself is made of a composite material developed and manufactured in-house, consisting of carbon fibre, epoxy, and aerospace grade aluminium alloy.

Entirely battery-operated, the lithium-ion battery makes up much of the weight of the drone, but provides sufficient power to fly a load of 100 kg up to 23 minutes at sea level, reaching maximum heights of 500 m, and average cruising speeds of 100 km/h.

The Ehang 184 aerial vehicle is equipped with eight motors, with two for each of the four armatures and propellers, giving a maximum output of 106 kW.

According to Ehang, it engineered the drone for safety, with full systems redundancy. If one set of power systems fails, the vehicle is still able to operate a normal flight plan to ensure the safety of the passenger. If the drone detects componentry malfunctioning or disconnecting, it will automatically land in the nearest possible area. To prevent the remote signal from being hijacked, communications is encrypted, with each unit having its own independent key.

For all intents the purposes, the Ehang 184 remains a remotely operated drone, with the passenger inside having no direct control over its route. Rather, the drone is pre-programmed to fly to specific destinations.

However, Ehang says the passenger can temporarily take over the aircraft in case of an emergency, in order to land the drone.

Ehang is hoping to get its passenger drone in market in 2017, with an estimated cost of US$200,000 to US$300,000 per unit. However, it will have to also contend with the laws and regulations around aerospace safety and the use of airspace — areas that the lawmakers of various countries are struggling to adapt to the latest drone technology.