The power and the Furey of engineering 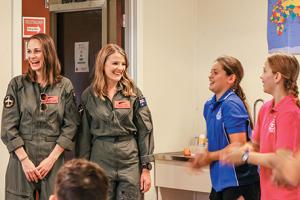 Seven years ago, Felicity Furey co-founded a volunteer-based organisation to inspire more young girls into the engineering profession by showing them real-world applications.

These range from how water gets into a tap to how mechanical engineers come up with exoskeletons that help people with disabilities walk. In what has grown from a handful of events in Queensland schools in 2012 to a national program, Power of Engineering also includes hands-on workshops where students can make purposeful objects such as prosthetic legs.

Felicity told EA's Create magazine that while gender diversity had been a topic of conversation for a long time, as her career progressed in the public and private sectors she became fed up being the only woman in meetings or on projects.

“I was just sick of being in this environment and it not being okay for me," Felicity said. "I often felt excluded from social events because I was a girl. Just like in university, I felt that I had to adjust to fit in.

"After I was in the workforce for a few years, I got sick of talking about it - I just wanted to do something about it.”

Now in 2019, Power of Engineering has inspired 8000 Year 8 and 9 students to consider engineering as a career. It has been so successful it has been funded by Boeing, Origin, Santos and QGC.

What powers Felicity's ambition to spread the STEM word started back in 2004 at university when she realised she was one of 12 women out of 120 people in her undergraduate class. By 2017, that 10% statistic had risen to 16.4% for Australian university students and 20% for overseas female students, according to Engineers Australia, but the upward trajectory continues to be a slow climb toward the elusive equal number with male engineering students.

Aside from the Power of Engineering program, Felicity works for Swinburne University in its Engineering Practice Academy as its Director of Industry Partnerships. Her efforts have contributed to Engineers Australia naming her a Centenary Hero.