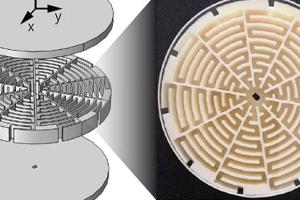 Researchers at the King Abdullah University of Science and Technology have come up with a new loudspeaker design that could allow small devices to produce powerful low-frequency sounds.

Usually, larger sources are required to produce low notes. This is true in instruments: for example, the double bass resonates much lower notes than the violin, thanks to a larger physical size that accommodates for longer strings. Loudspeakers work similarly, with clear bass notes being produced by large speakers known as woofers. As a result, speakers which are constrained in size, such as those in mobile phones, are limited in their ability to produce lower notes, instead sounding “tinny”.

Jiajun Zhao and Ying Wu from KAUST worked with Likun Zhang from the University of Mississippi to propose a new miniaturised device that is able to emit deep and powerful sounds, using subwavelength technology.

According to Zhao, the new design uses structural resonances to build a miniaturised loudspeaker that works as well as traditional audio setups which combine small loudspeakers and large woofers, producing both high frequencies and low frequencies.

The researchers propose putting a sound source in a ring-shaped enclosure made from high-density brass with coil air-filled channels. The air channels reduce the overall speed of the sound, enhancing low-frequency sounds while suppressing higher sounds. The resonance of the air within the channels means a lot more electric power is converted to sound power.

The researchers used computer simulations to show that the design not only enhanced low sounds, but also emitted powerfound in all directions, overcoming the directionality of traditional loudspeakers.

The engineers’ next step is to build and test a real version of their enclosure design.

“When a cell phone source is enclosed by the structure, more than 200 times the sound power is emitted than when the structure isn’t there,” says Zhao. “We are happy to see that our design doesn't just work on paper but also in reality.”

[Image: Schematic and photo of the enclosure designed to change the environment around a sound source. Made by 3D printing out of acrylonitrile butadiene styrene (ABS) plastic, the encloser greatly enhances the power of low-frequency sounds. © 2017 Jiajun Zhao.]